Over the past few seasons, Otto Porter Jr. has played in a few situations that have been less than optimal for him as a player. For many reasons, the main one being injury, Otto Porter has not been able to maximize his role on an NBA team since his early days in the league with the Washington Wizards. He is beginning to create a very effective role for himself on the Golden State Warriors and is contributing to the success of his team in a different way than he was with those Wizards teams. 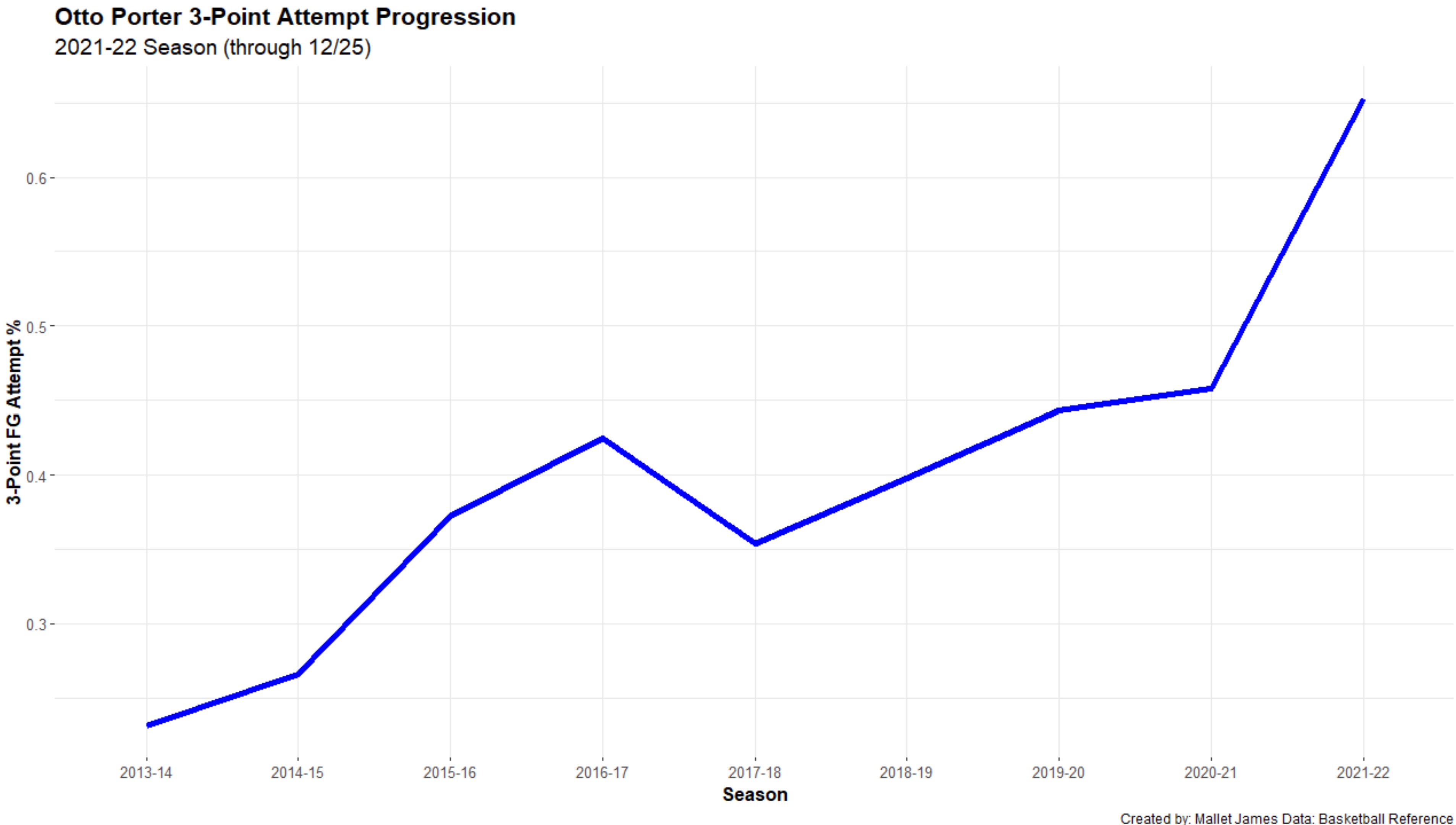 Three-point attempts have gone up everywhere in the league since Porter’s rookie season in 13-14. Porter was following that progression gradually up until this year where his 3-point attempt rate has spiked to 65% of all shots taken, up almost 20 percentage points from last season. Porter has always shot the three ball well, 40% on his career from beyond the arc, but in this low usage, space the floor role alongside Steph Curry he has had the chance to let it fly much more often relative to his other looks. His 115 3-point attempts to this point in the season are his most since the 2018-19 season, he has made 46 of them, continuing to shoot right at 40% from three. 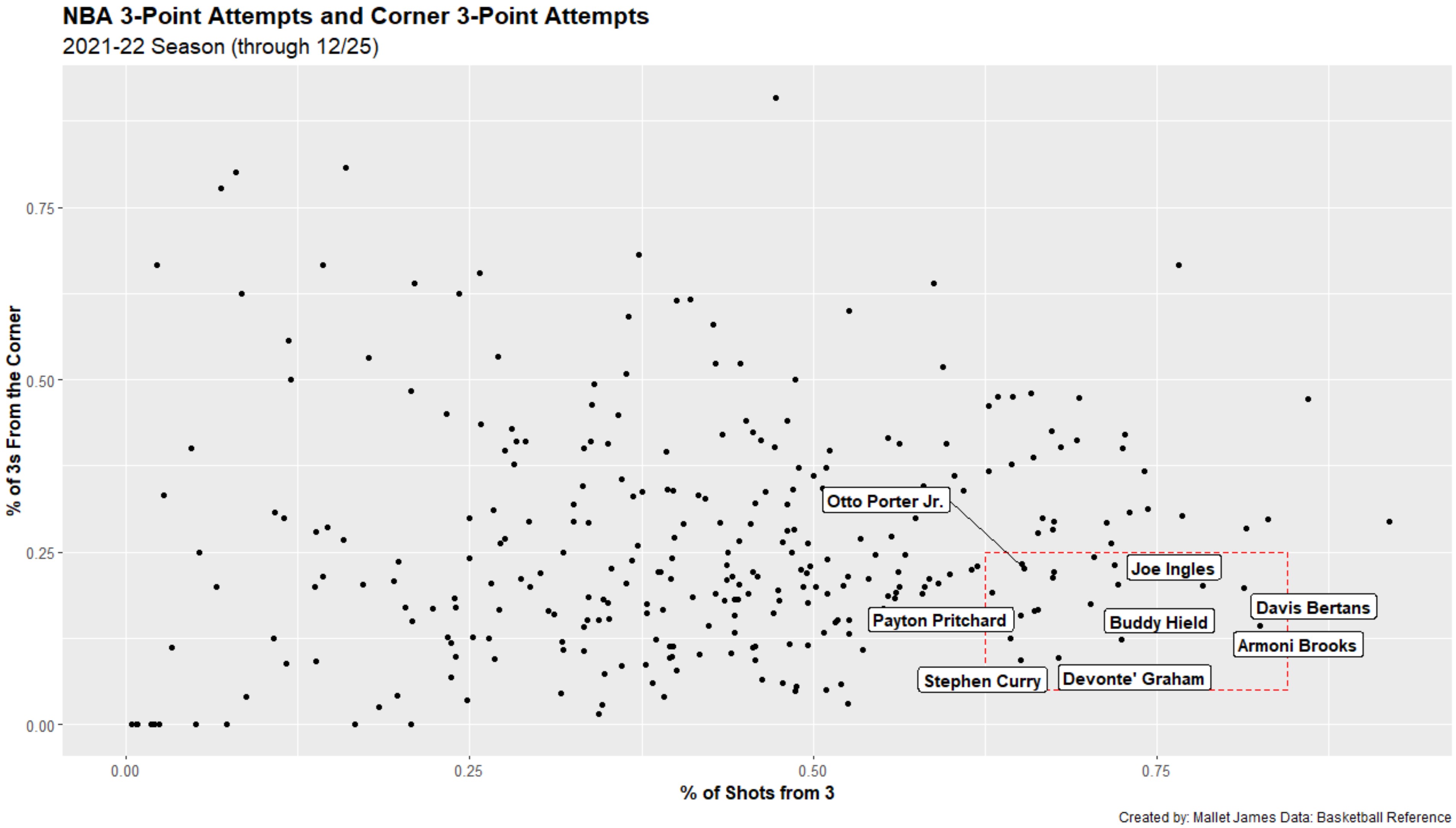 After seeing the rise in Otto Porter’s 3PA%, I instantly wondered if he was the benefactor of a lot of open looks from the corner. In a space the floor role where less-featured players are many times tucked in the corner, this would have made some sense to me but it is far from the truth. Only 22% of Porter’s three point attempts have come from the corner this season, noticeably less than his early days in Washington when he took about 32% of his threes from the corner. 93% of his threes on the season have been assisted but what is most interesting is that most of them are coming from above the break. His shot profile from 3-point range is similar to many players that rely much less on catch and shoot attempts. His teammate Steph Curry(59% assisted), Devonte Graham(74%), Buddy Hield(82%), and Joe Ingles(76%) all have a similar 3-point profile to him in that they shoot the 3 a lot while not shooting many from the corners but for them it’s done more often off the dribble.

In this piece on Otto Porter’s role after their Christmas day game we see some clips highlighting Otto’s 19p, 6r, 3a game against the Suns. The Warriors were down a few guys so Porter’s game got to shine a little more in what was an incredibly efficient 8-13 from the floor. With Steph Curry on the floor, in a game where the Warriors are down a few guys, you expect much of the offense to start and end with him and it did in many ways. He took 27 shots, more than double Porter’s second highest, 13 attempts from the floor. With Porter on the floor as a more than capable scorer and shooter, as his health has allowed him this year, we get to see a player that benefits greatly from the gravity that defenses show Curry.

When an on-ball screen is made, Steph is doubled, which has led to many open looks from 3 for Porter when he is the screener. When Steph gives up the ball and cuts through he draws extra attention from defenders that are off the ball, watching as he quickly meanders his way through traffic. It is all of this and more that make Steph the perfect guy to play with on offense. Porter is making a ton of the open looks he is receiving from the extra defensive attention that Steph draws. Because of Steph’s unique movement and motor on offense, catch and shoot looks may be coming more often for Porter above the break in the halfcourt but this is something to be explored further.

Porter starts many offensive possessions either directly in the corner or on the block. When he starts on the block, in some sets there will be a down screen for him and then an option for a catch and shoot attempt near the top of the key. When he starts in the corner and action occurs on the opposite side of the court he has drifted slightly above the break to receive a cross-court pass to shoot a 3-point jumper. Of course these aren’t the only actions Porter is shooting it out of, his shot chart on StatMuse shows that he has enjoyed shooting it most from the wing.

Porter is shooting more threes but his versatility as a jump shooter is still in full force. He has been shooting above league average basically everywhere inside the arc as well. In an offense with Steph Curry on the floor there will always be open spaces for shooters. Porter is finding those open pockets of floor, wherever they may be, and making the shot.

Porter has the fourth best DARKO Daily Plus Minus on the Warriors roster at this point in the season (DPM of 1.4). DPM is a measure of how much the DARKO model thinks a player impacts the score of an NBA game. In front of Porter on the Warriors’ roster are Steph Curry (DPM of 5), Draymond Green (2.6), and Gary Payton II (2.1). Payton has been another welcomed addition to the Golden State rotation on both ends of the floor. Notice that Steph’s impact on the score of the game is quite strong, no surprise. After a few fringe years, Porter has become a very important player on one of the best teams in the NBA. Granted, playing with Steph Curry and Draymond Green, rather than the Bulls and Magic rosters that Otto has played on in years past is a big step up. Someone has to be fourth in impact on the league’s best team. Someone also has to knock down looks that have been given up at the expense of life being made miserable for Steph. Porter has increasingly stepped up to the plate to do so for his team. Porter’s ability to knock down shots paired with plus defense has contributed to his top 5 DPM on the Warriors. 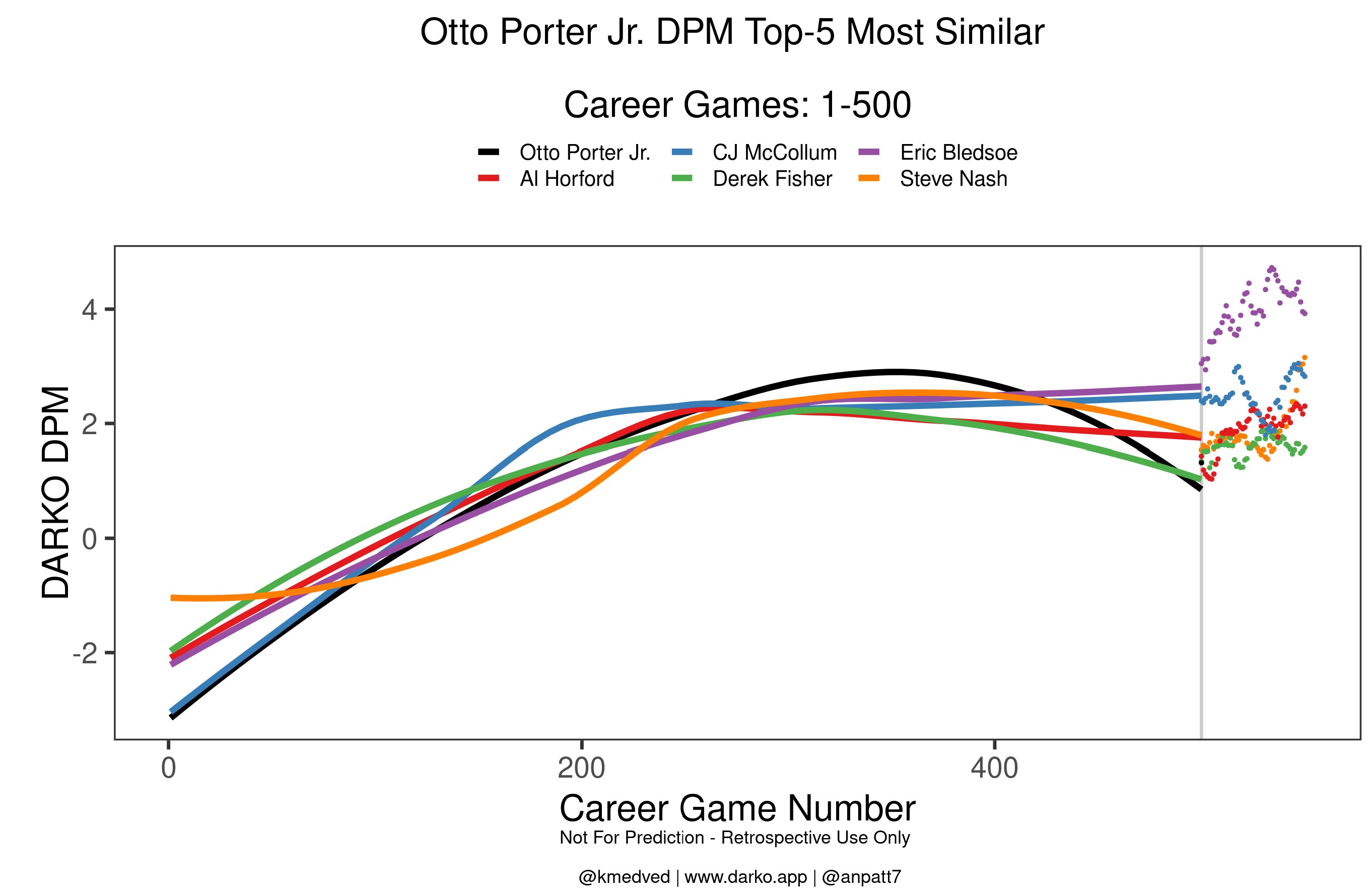 Porter’s DPM Similarity Chart, up to this point in his career, gives us one last look at where he has been so far. Porter, at only 28 years old, has been on a considerable DPM downturn lately which is not a great sign. What is most interesting is the players that are included with him on the chart and their level of impact progression through 500 career NBA games. If there were tiers of players to be similar to in terms of impact I would say the CJ McCollum, Steve Nash, Eric Bledsoe, Al Horford, and Derek Fisher tier, on aggregate, although strange is a tier or two above where many would put Otto Porter given his career production so far. He is beginning to show why he may belong amongst some of those names.

The NBA is very much a role based league, when players change teams it takes a while for them to assume the level of impact that they had for their past team. The Washington Wizard version of Otto Porter may be somewhat erased when considering his play style on the Warriors’ roster today but he is starting to climb back to the level of impact that he reached in his later years with the Wizards. On a minimum contract, Otto Porter comes as a massive value to the Warriors. If he continues to progress and reaches or exceeds the peak level of performance he had with the Wizards, in the 2021-22 season, it will be a huge win for his team and all those who decided to take a chance on his play. 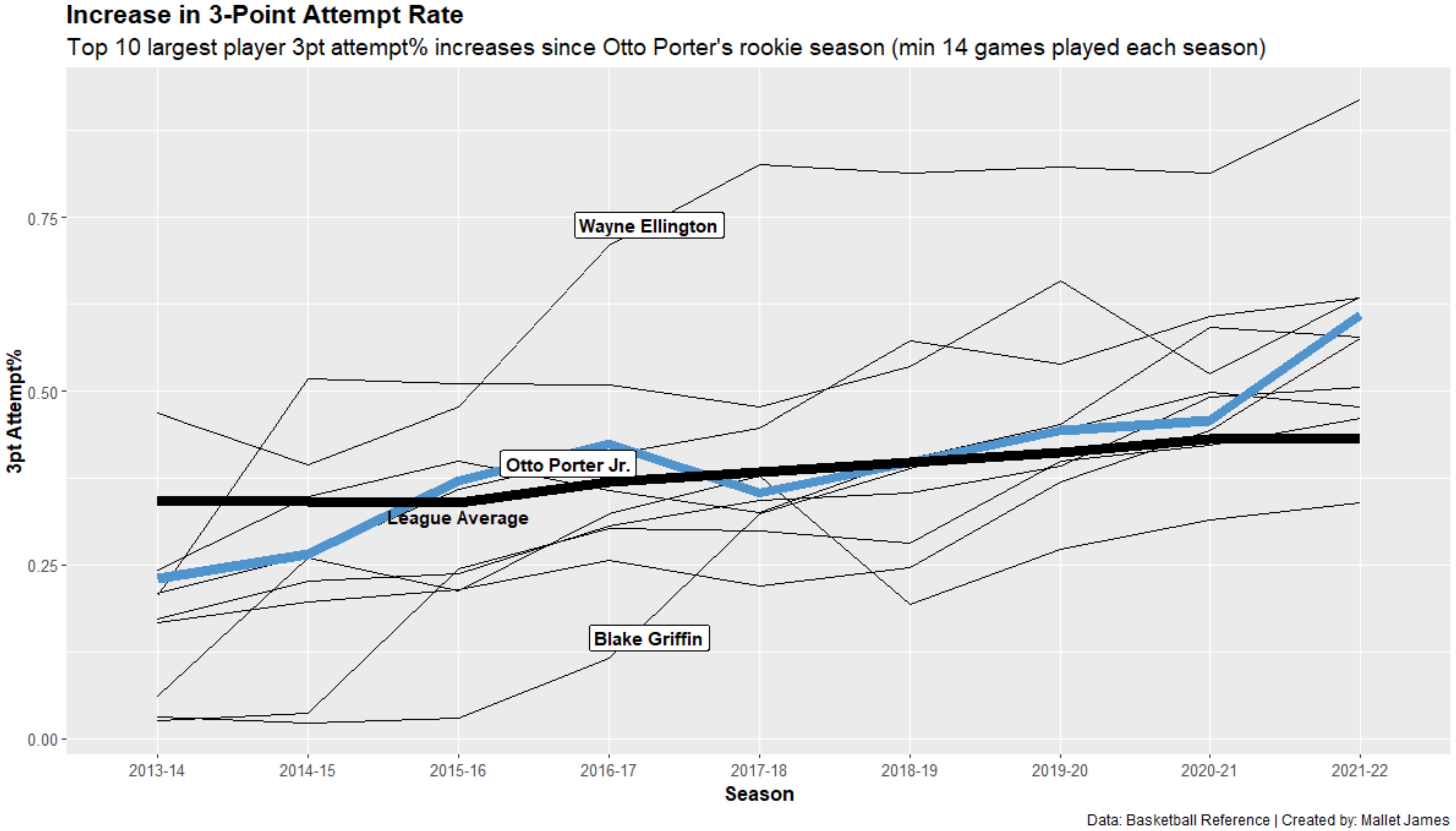 A quick update on Porter’s 3-point attempt% progression. Still a massive jump from his previous years, Porter’s 3-point attempt% has slowed over the past few weeks with players like Jordan Poole, Draymond Green, and Klay Thompson returning to the Warriors’ lineup. With their return, he has seen more looks inside the arc. It will be interesting to see how the Warriors offense continues to shift with Klay back in the mix and key players returning.

The chart above shows the top 10 largest single player increases in 3-point attempt% since Porter entered the league in 2013. There are 55 guys that fall in Otto’s category of playing at least 14 games in the league every year since the 2013-14 season, including this season. It is probably not the best way to qualify guys for this chart and 14 games per year as a minimum may not be enough but it allows us to take a look at how Porter has progressed along with the league and other top movers.

I highlighted Wayne Ellington and Blake Griffin on this chart as well since their 3-point attempt progression has been noteworthy. Griffin started his career only working inside the arc, mostly at the rim, and flipped the switch right around the time he left the Clippers for the Detroit Pistons. He shot 1.9 threes per game in his last full season with the Clippers and 7 threes per game in his first full season with the Pistons. Many use Brook Lopez as an example of a player that uprooted his game to adapt to a league that has discovered the relative value of 3-point shots. While Blake Griffin and Lopez have never been the same style of player, Griffin altered his game in much the same way as Lopez, opting for more threes. It’s not that the rim attempts aren’t there for each player, it is really that the additional midrange shots that were once there have been ousted for three point looks. 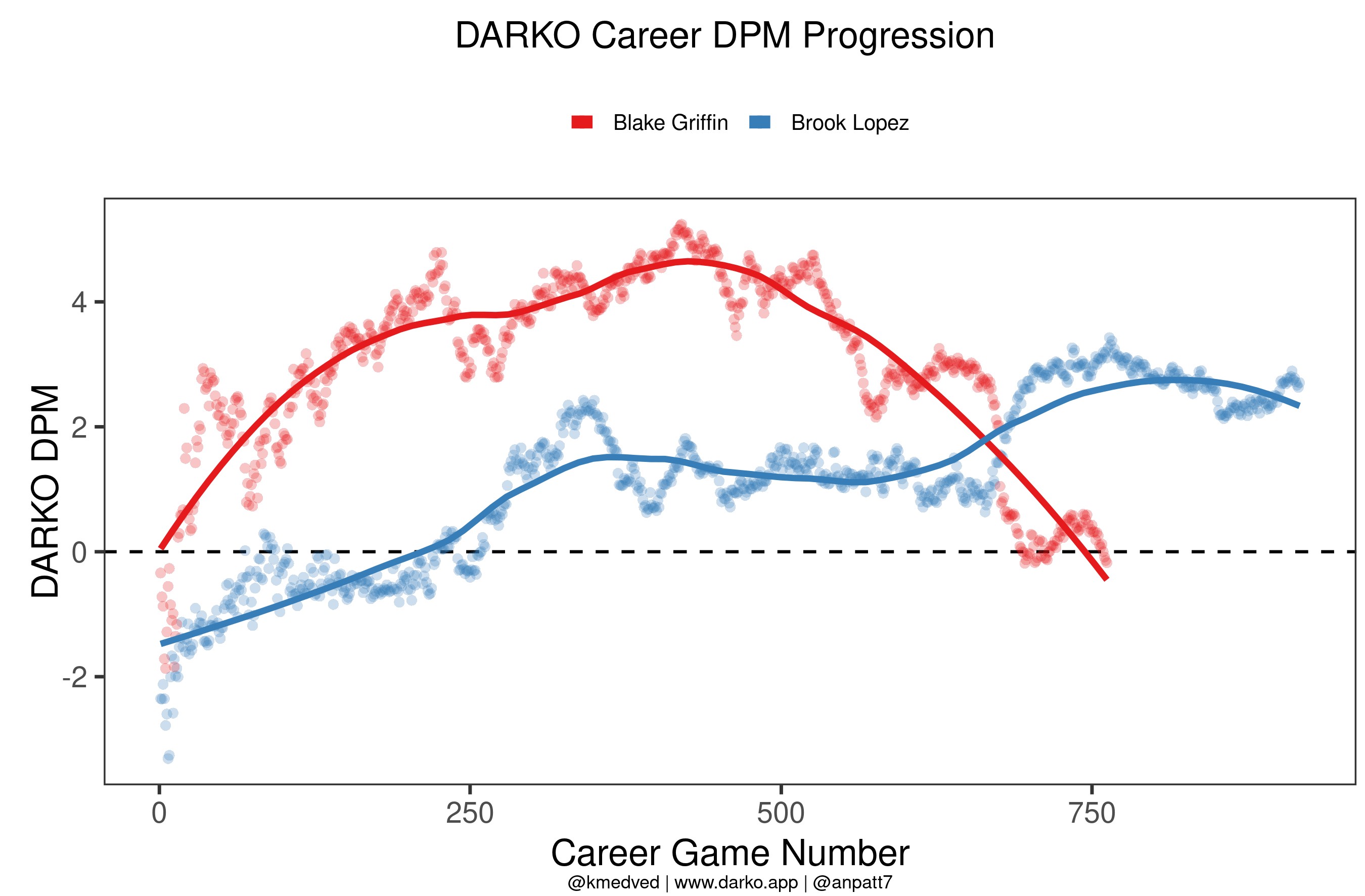 The change for each player has come with varying degrees of success, Lopez has thrived in his role on the Bucks offense since shooting more threes, unfortunately out indefinitely this season. Blake Griffin’s impact though has fallen quite steadily ever since he incorporated more threes in his game (DARKO DPM chart above shows the progression for each player). They are each very different players so there is more to their relative success than simply the three point shooting change. It enforces again that the NBA is a very role based league, Lopez has found a role that suits him, Griffin is still searching.

Then there’s Wayne Ellington, the ultimate 3-point specialist. He currently leads the league in 3-point attempt% among players that have played at least 20 games, with 92% of his shots coming from three this year. In the dataset of 55 players who qualified since 2013-14 no one else comes close to Ellington’s increase in 3-point attempt%. Ellington, who still was above league average in 2013-14, has increased his 3-point attempt% by 45 percentage points. His role on the Lakers is an outlier even in a league where there are many specialists who space the floor and only shoot the three. Ellington’s progression is interesting when put in this context because we think of guys like Griffin and Lopez as those who have changed their game most to keep up with 3-point shooting demands. Given their play style beforehand, they definitely have changed their games most. Ellington’s shooting identity though has shifted massively too, even if he was mainly known for his shooting ability 10 years ago. It’s another indication that the landscape of the game in the NBA has changed a lot over the past few years even for the most jump shot-centric guys.

Data and Metrics used for this post from Basketball Reference, StatMuse, and Kostya Medvedovsky and Andrew Patton’s Darko Application