Penn State Basketball: Notes from the Past 20 Years by the Numbers 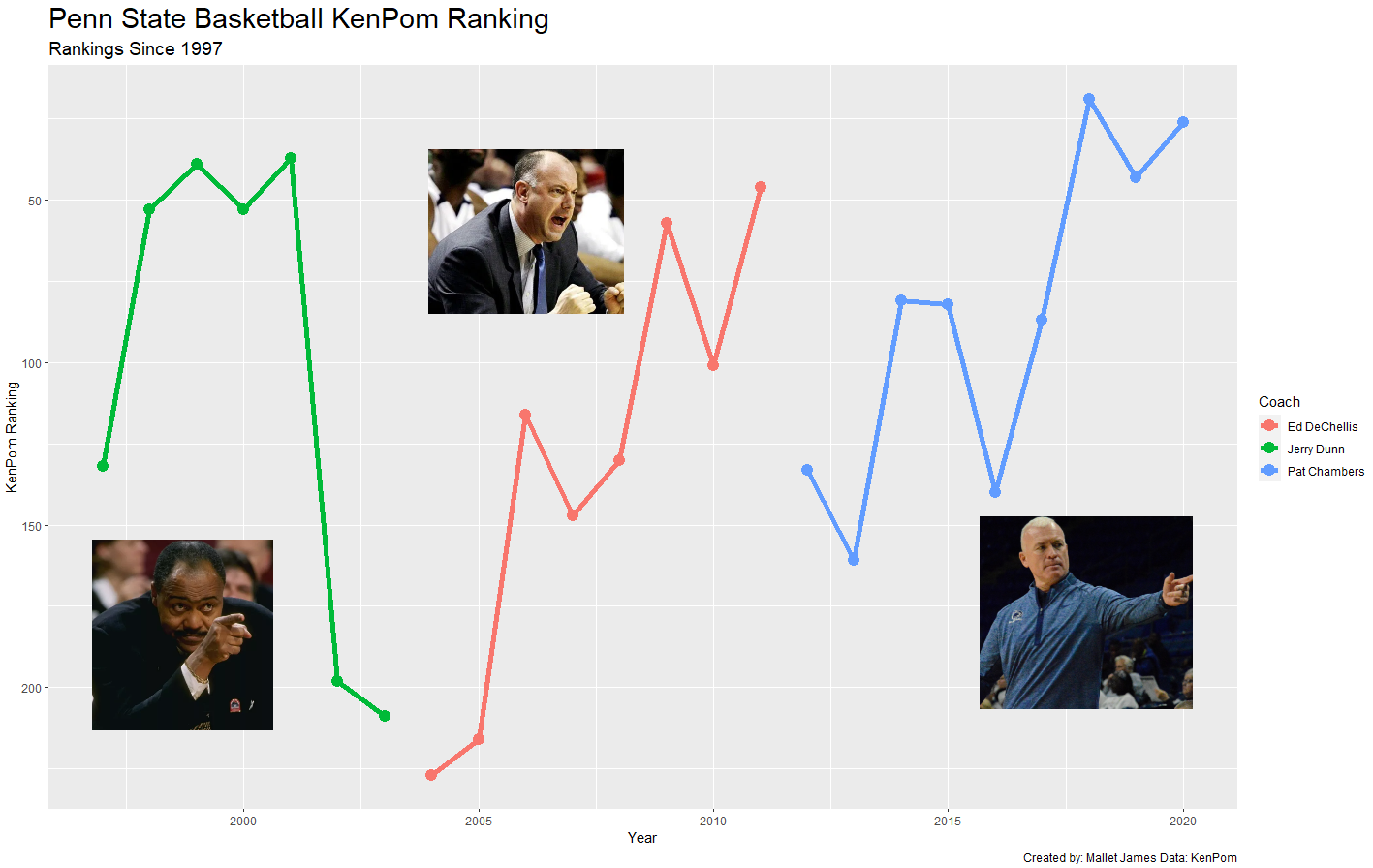 Being a fan of Penn State basketball is not for the faint of heart. Two NCAA tournament appearances in the past 20 years and only two seasons of above .500 play in the Big Ten leaves a lot to be desired. 2020 would have certainly given the Nittany Lions their highest seeded NCAA tournament appearance since 1996 when the Lions, under Jerry Dunn, were a No. 5 seed. Unfortunately, that, along with Lamar Stevens cementing his place atop the all-time Penn State leading scorers list, two marks of a historic season in the record books, did not happen because of the pandemic. Even if the ending of the 2019-20 season is nowhere near what the Nittany Lions expected or wanted, the season marked a massive step forward for the Penn State basketball program. It proved that they could vie for the number 1 spot in the Big Ten and compete among the nation’s best.

A slight step backward for the program came after head coach, Patrick Chambers resigned just a few weeks before the start of the 2020-21 season. Due to what the end of Coach Chambers’ tenure means for recruiting alone there will almost definitely be yet another downward shift coming in what had been pretty steadily climbing program rankings over the past decade.

Regardless of what Coach Chambers moving on means for the future of the program it does allow for a good chance to take a look at where the Nittany Lions have been over the past 20 plus years from a statistical standpoint. Ken Pomeroy has advanced metrics dating back to 1997 available on his site which allows us to take a look at where each of the Dunn, DeChellis, and Chambers coached teams performed best and how they compared to one another given that the length of each coaches’ time at Penn State was fairly similar over that 24-year span. There are 7 years of data for Dunn, Dechellis’s full 8-year tenure, and Chambers’ full 9-year tenure on kenpom.com.

There are many places one could start when perusing statistics if you wanted to learn a quick snapshot of the fingerprint of any given team or a specific coaching style. Is the team more offensive or defensive driven, do they shoot a lot of threes… do they make them? These are all questions I asked myself when diving into the PSU basketball teams of the past 20 or so years. None were as interesting to unpack, at least from a graphical standpoint, as the evolution of the tempo of Penn State basketball teams since the mid-90s.

Adjusted Tempo is the number of estimated possessions per 40 minutes for any given team. Tempo matters because it gives an idea of coaching philosophy, the type of players that played under each coach, and really is the quickest way to discern the identity of a basketball team from one metric. There are notoriously slow teams like Wisconsin and Virginia who see between 65-68 possessions a game while Roy Williams’ coached teams (UNC and Kansas) tend to play faster than almost any successful power conference team, seeing upwards of 74 possessions a game in some years. There’s no saying if playing up-tempo or slowing things down leads to success but it does heavily impact the game on the floor.

As Adjusted Tempo applies to Penn State teams, we see an interesting trend that, starting with Jerry Dunn coached teams, was a fairly balanced variety of mid-paced to highly up-tempo teams. From there DeChellis really slowed things down, to the tune of less than 60 possessions per game in his final season. That would rank slowest in the nation in 2020 by almost 5 possessions, Virginia is currently slowest with 65 possessions a game. Pretty safe to say that the game has sped up a bit, the shot clock change from 35 seconds to 30 starting in the 2015-16 season does play a pretty big role in that. Then with Chambers coached teams, we see a steady increase in Adjusted Tempo from 63.1 in 2012 all the way up to 70.9 in the 2019-20 season. We have learned a lot about shooting the three pointer across all levels of basketball since 2012 and Coach Chambers definitely gave his most prolific shooters the green light when they had a good look. That, paired with many Chambers’ coached teams that were strong at turning over opponents makes for a lot of possessions.

The parabolic nature of the plot is what struck me right away as it shows the clear difference in the philosophy of each Penn State head coach and how it progressed over each of their tenures. When you have your guys, it makes it a lot easier to implement your game plan, that’s a clear trend in at least the past two coaching eras. DeChellis has always been most comfortable slowing things down and continued to do so throughout his time at Penn State. Now in his 10th season at the Naval Academy he had one of the slowest tempo teams in the nation this past season, ranking 351st out of 353 Division 1 teams with 62.5 possessions a game. Coach Chambers started relatively slow with the personnel that DeChellis left to him but consistently moved the tempo forward in his time with the Nittany Lions. 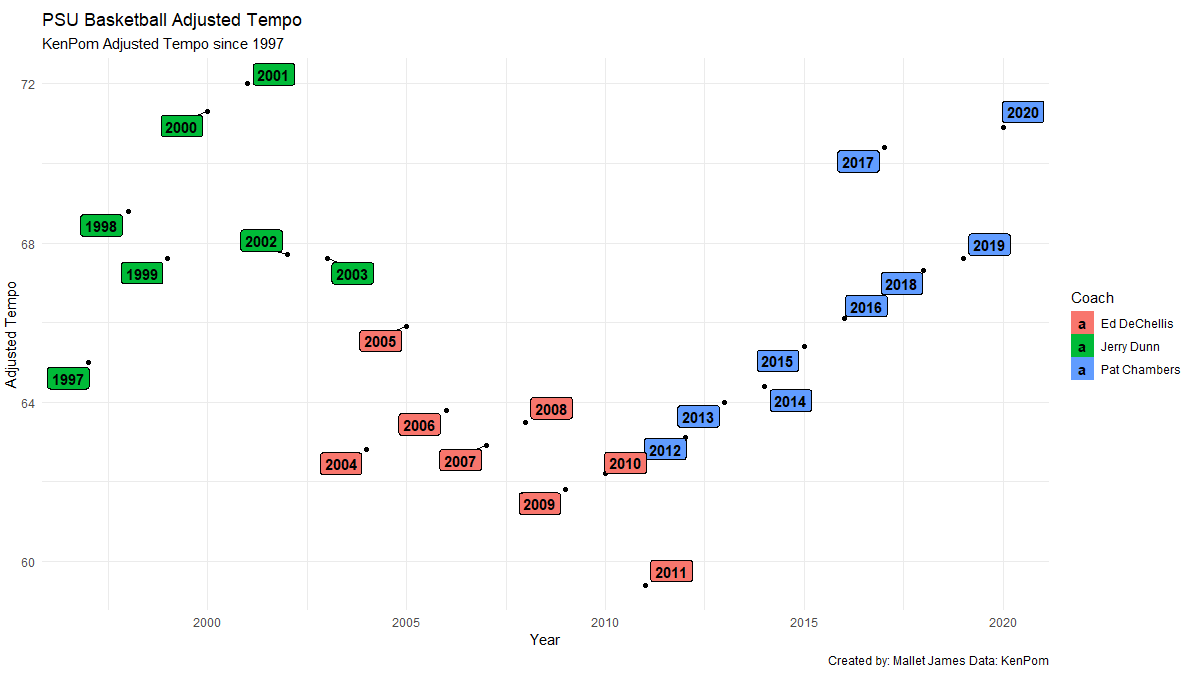 Now we can take a shot at answering the question that seems like the most popular one to tackle as it relates to Penn State basketball over the past 20-plus years. You can judge a coach by wins, tournament appearances, etc. all of which are fairly similar among each of the Penn State coaches in the past 20 years but what head coach truly did give us the most successful basketball teams?

There are different facets of the game that each coaches’ teams were proficient at as we will see later on but probably the best way to answer the question of who gave us the most successful teams would be to take a look at the metric that KenPom uses to rank college basketball teams, Adjusted Efficiency. Adjusted Efficiency is basically the number of points a team scores minus the number of points a team allows per 100 possessions with some opponent and pace weighting. As we see in the four-quadrant graph below where the bottom right contains both above average defensive and offensive efficiency among Penn State teams over the past 20 plus years there is a pretty good mix of Dunn, Dechellis, and Chambers coached teams. The Chambers coached team in 2018 featured the most efficient combination of defense and offense since 1997 but was it truly the best team?

The combination of each at an equivalently above average rate did not produce the on-paper success that the teams of 2001 and 2020 had which were teams that exceled specifically on the offensive or defensive end of the floor. We also see that Dunn has 4 teams in that fourth quadrant, Chambers has 3 and Dechellis has only 2. The 1998-2001 Dunn teams were very solid but were they better than the Chambers teams of 2018-2020? Defensively that would be an emphatic no. Chambers’ last 3 teams have been by far the most successful on the defensive end of the floor out of any Penn State team of the past 20 years. Then the question is how much worse offensively would the 18-20 teams be when matched up against the best of the 98-01 teams? It seems to me that the efficiency metric suggests that there would not be that much difference in offensive success. Who knows what a Joe Crispin vs. Lamar Stevens team matchup would actually look like with each player in their prime but with the numbers alone it appears that the cumulative of Chambers’ top 3 teams would outperform Dunn’s top 3. The average offensive efficiency of all Chambers coached teams was 106.9, Dunn coached teams were 106.2. The average defensive efficiency of all Chambers coached teams was 97.7, Dunn coached teams were 99.2.

Apart from trying to figure the best team or best coach out of the 3 during their time at Penn State there are some other interesting trends in this plot. Chambers and Dunn coached teams were much better on the defensive end of the floor while Dechellis’s teams were narrowly better than both Chambers and Dunn teams from an offensive efficiency standpoint. Ed Dechellis also had the worst two teams of any coach during the KenPom data collection era, mostly not his fault due to the team he was tasked with rebuilding when he took over, but worth mentioning as we move forward. Chambers had a fair bit more to work with when he took over the program in 2012 but the seasons where Penn State was arguably the worst team in all of top-tier conference basketball should be taken into account when considering each of the coaching eras. 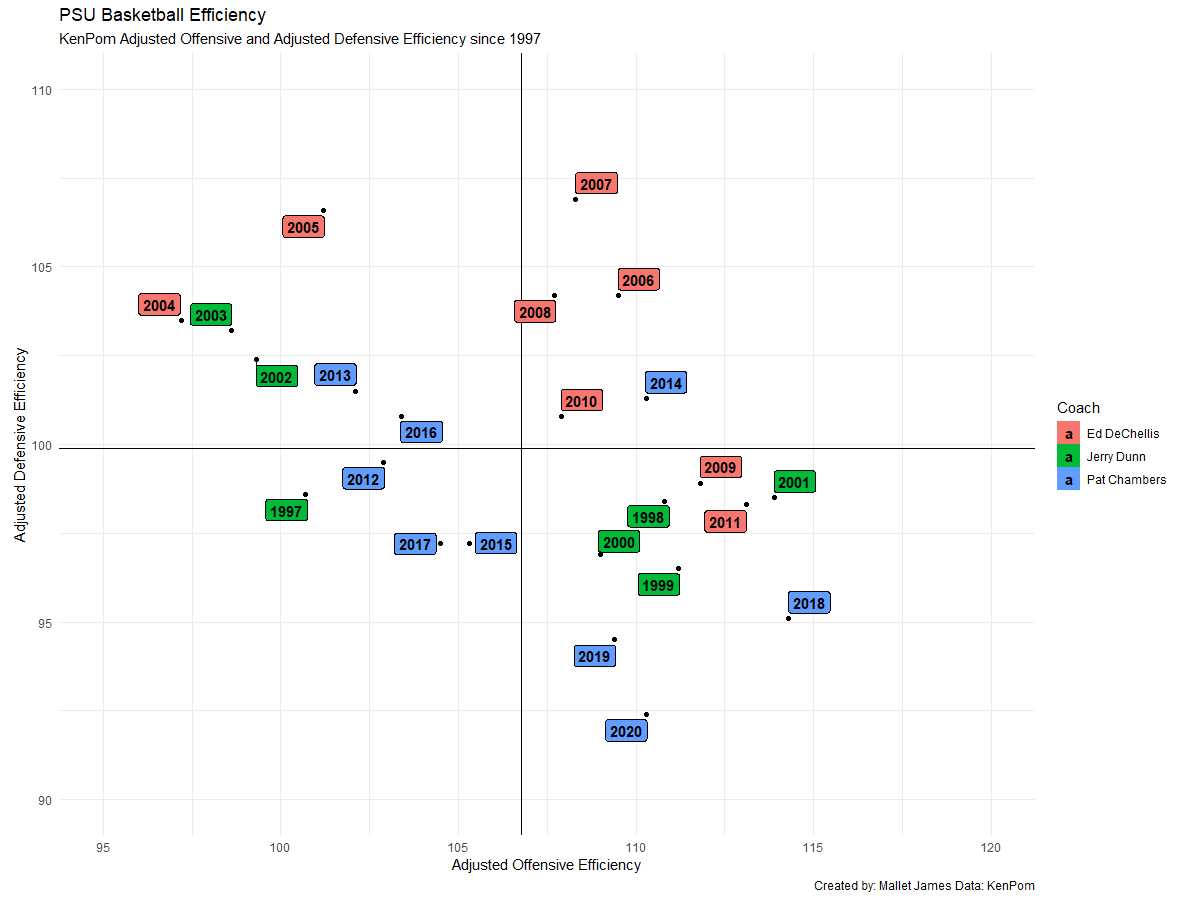 Moving on from offensive and defensive efficiency there are some more specific statistics to take a look at from each team and coaching era. The first that was an interesting one to me was 3-Point percentage, both in how each coaches’ teams shot the three and defended the three. DeChellis coached teams own the first quadrant where they shot an above average three-point clip but also gave up a higher three-point percentage than average in comparison to all Penn State teams. Chambers’ teams, while shooting a lot of threes did not shoot them entirely well, all of Chambers coached teams had below average three-point shooting percentage apart from 2018 which happens to be the best three-point shooting year in all of the KenPom data for Penn State… thank you Tony and Shep. Dunn probably wins this category in terms of the data we have as his best teams were above average at both shooting and defending the three. His two worst teams were below average at both but not enough to overshadow what was a 7th best in the nation, 29.7% three-point percentage allowed to opponents in 2000. 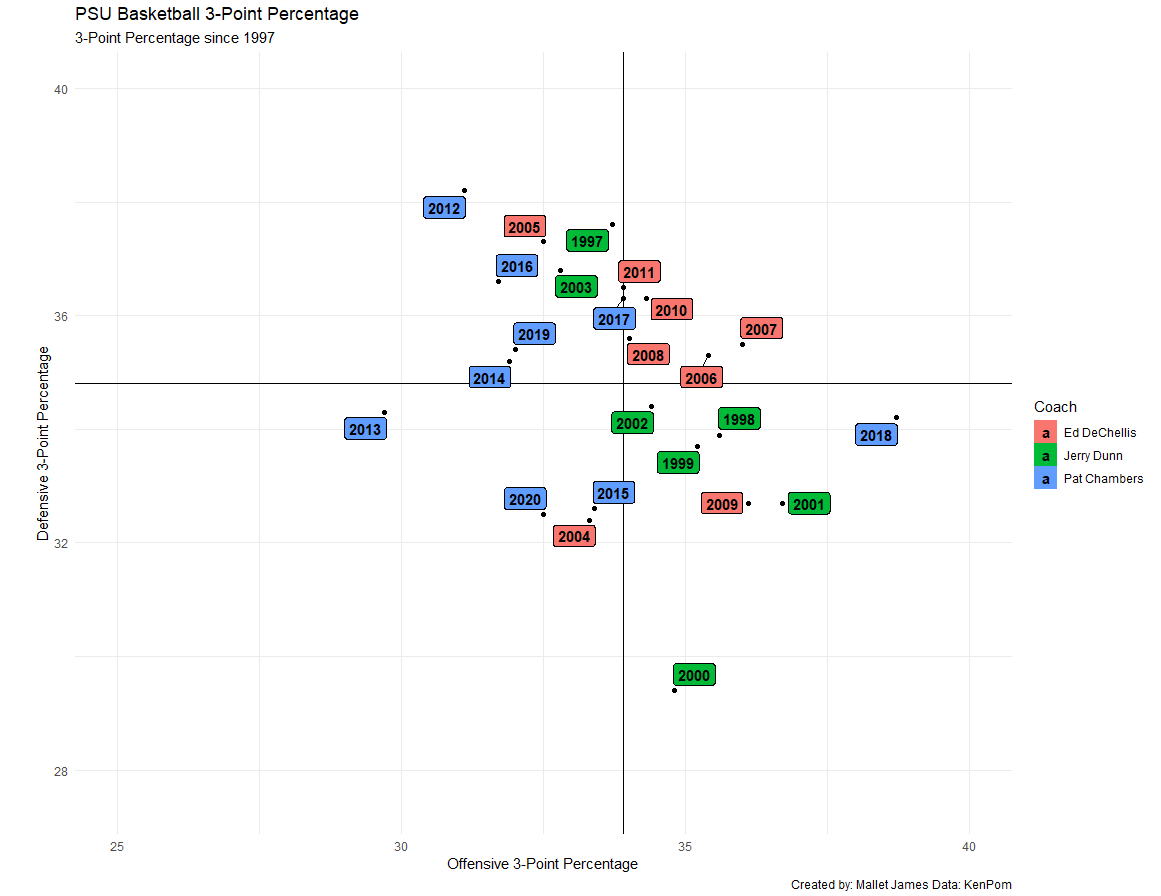 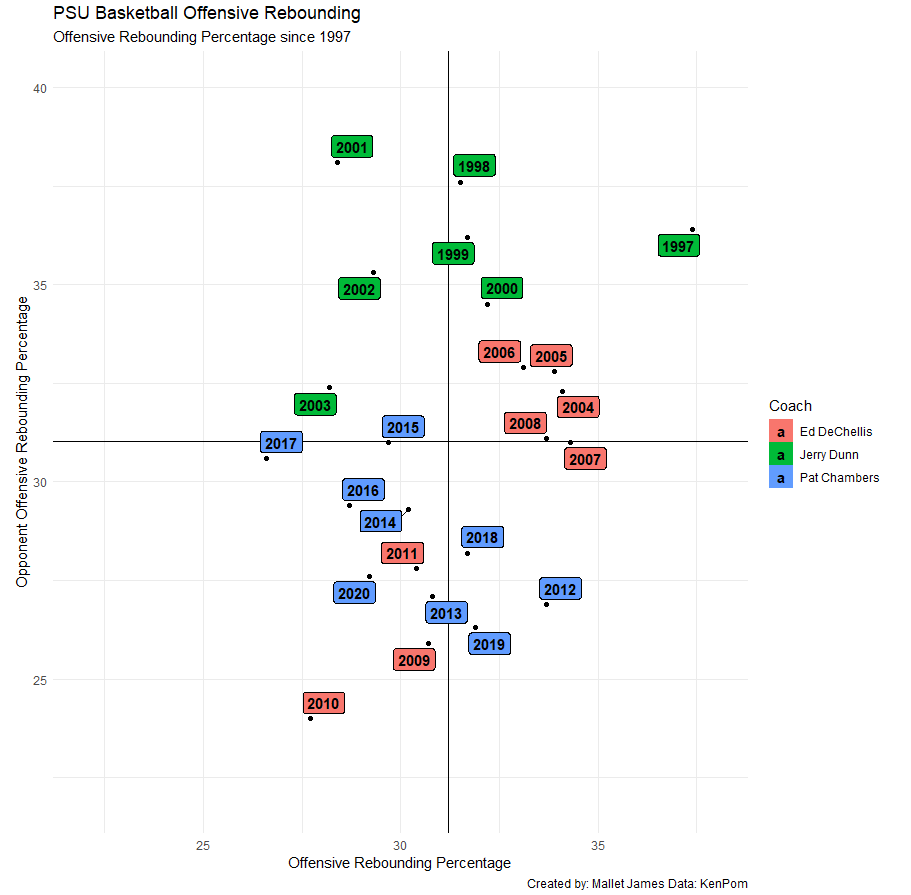 One more metric to take a look at when considering the performance of Penn State basketball teams over the past 24 years is free throw rate. This is another one of Dean Oliver’s four factors and basically quantifies a team’s ability to get to the free throw line, one of the most desirable results of an offensive possession. Directly below you can see, much like offensive rebounding percentage, each coach had their own fairly equal share of teams that could get to the free throw line and teams that failed to do so. What stands out is the ability of DeChellis teams to keep opponents off the foul line, each of his teams were above average in comparison to other Penn State teams at keeping opponents off the line. 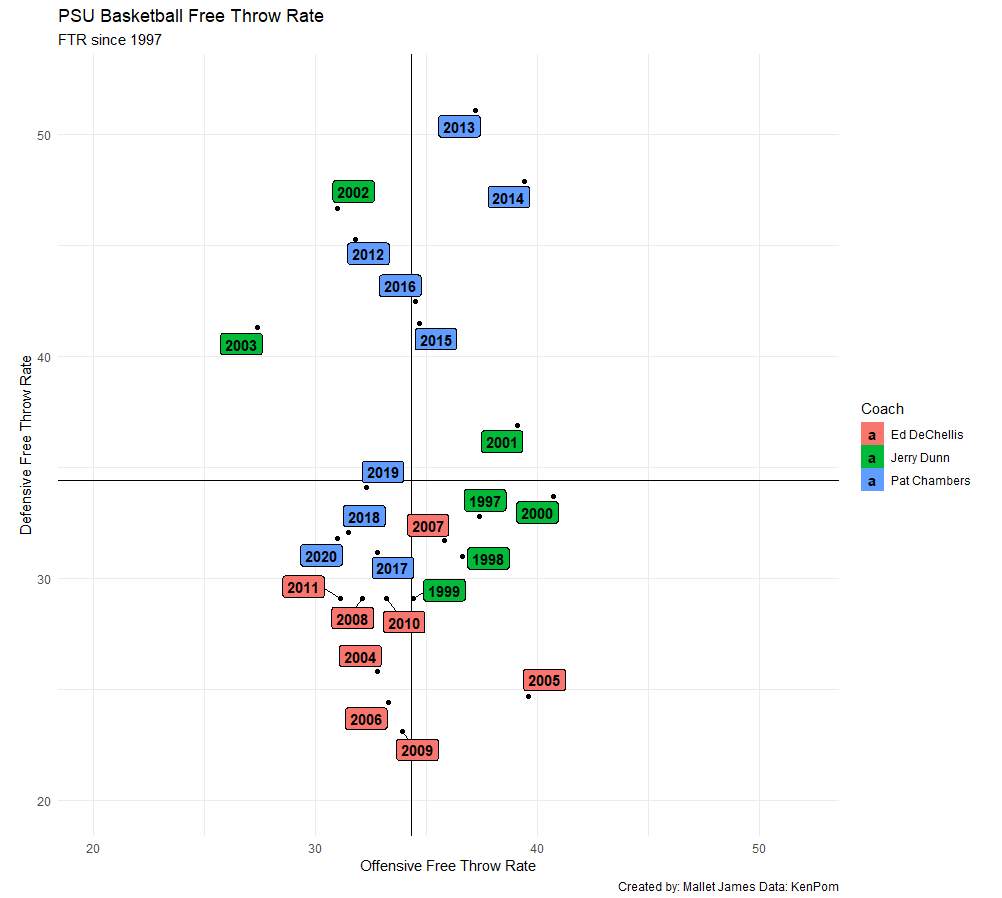 The bar chart below shows how DeChellis teams’ defensive free throw rate stacked up against Dunn and Chambers coached teams. Well ahead of each of them at only 27.1% or about 1 free throw allowed for every 4 opponent attempted shots, DeChellis’s teams kept opponents off the line but it makes one wonder what kind of shots were given up at the expense of not fouling as DeChellis teams were the least efficient defensively out of the three coaches. 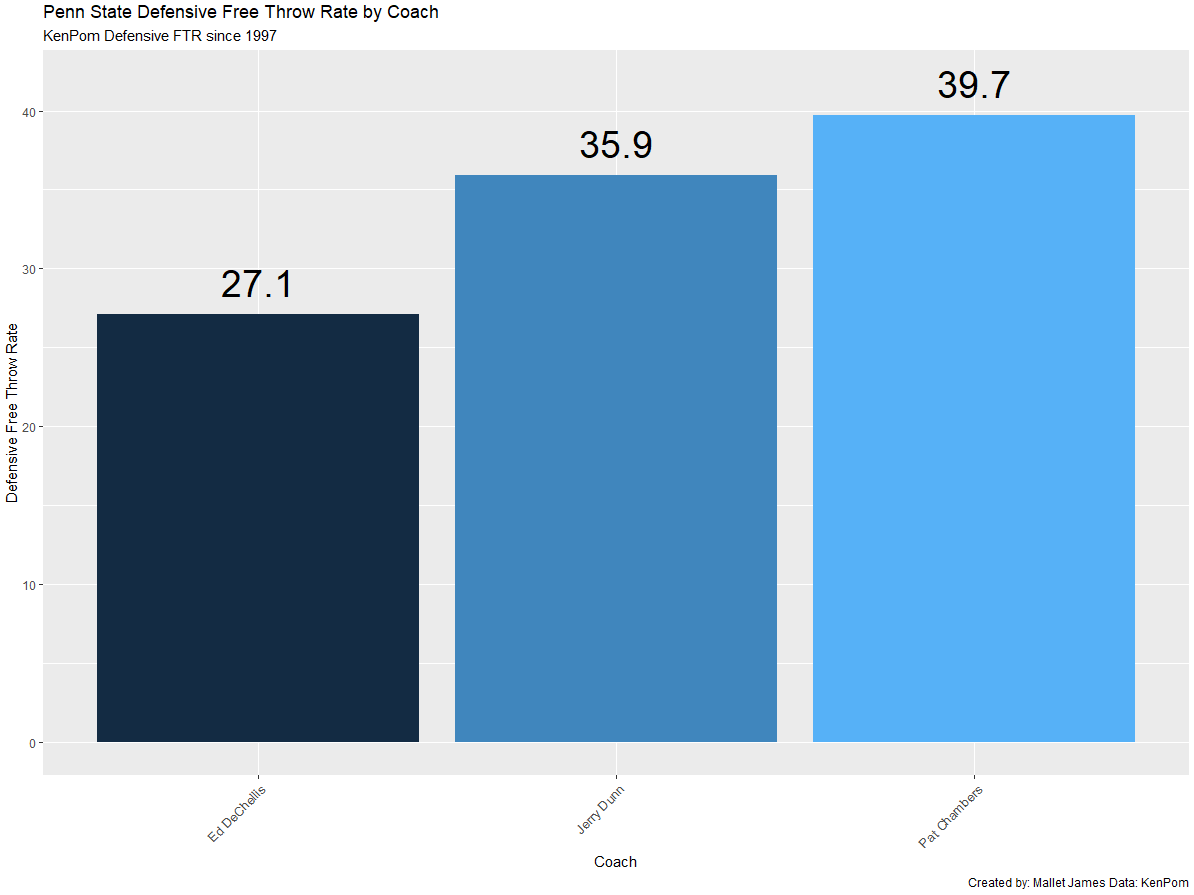 While there is not a clear-cut number 1, most successful coach according the numbers since KenPom began tracking in 1997. Between Jerry Dunn, Ed DeChellis, and Pat Chambers there have been some very fun teams and distinguishing features that define each era of Penn State basketball.