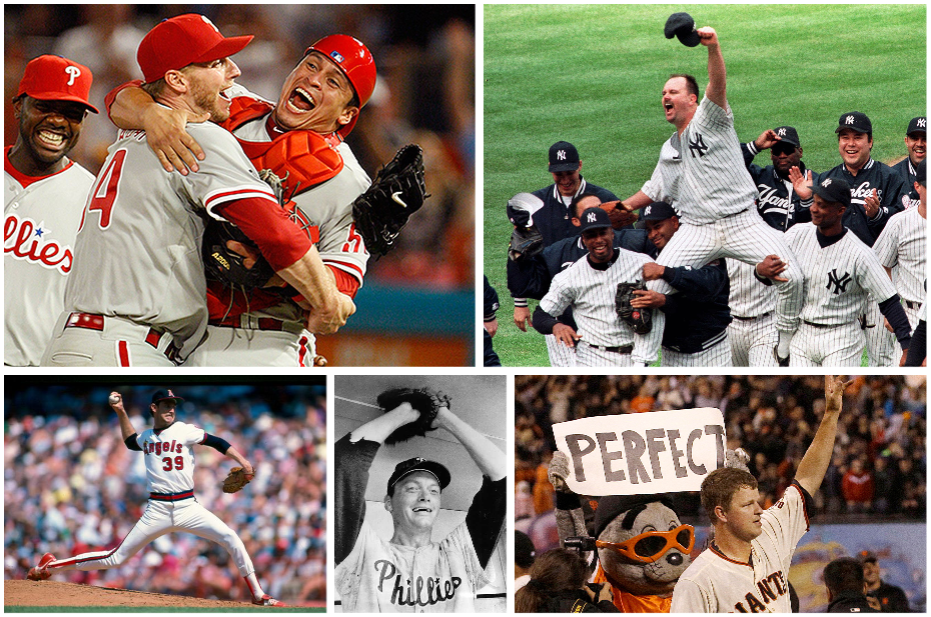 by Mallet James and Kyle Kroboth

In now our second installment of a 4-part series where we attempt to rank all 21 perfect games in the modern era using a numbers only approach, we take a closer look at some of the middle tier likelihood perfect games. Some terrific names and stories are featured in this section including the legendary Roy Halladay, David Wells, and Jim Bunning. We introduced our ranking method using Bradley-Terry in our introductory post.

On the final day of the 1984 regular season Mike Witt threw a perfect game in Arlington against the Texas Rangers. It was basically a moot game going in, both the Rangers and California Angels were out of the AL West playoff race and just looked to finish the season on a high note. Mike Witt did just that, putting on a performance that was certainly an octave or two higher than anyone might have expected to complete the season.

Witt was just 24 when he threw his perfect game, rounding off a season that was by far the best of his first four years in bigs and sparked some pretty solid years to follow in the mid-80s. By most statistical measures Witt had an above average year in 1984, he posted a 116 ERA+, and at the time a significantly above average 7.2 SO9 which would go on to be the best of his career.

Witt faced a Rangers lineup that was pretty subpar, a 69-91 team coming into the final game of the season. The core of the Ranger lineup was Gary Ward, Larry Parrish, and Pete O’ Brien each of whom posted an OBP of above .330 which would qualify as about 10 points above average in the 1984 season. No one else that stepped in the box for the Rangers touted above a league average On-Base Percentage. Not the toughest lineup Witt may have faced on the year and his .306 POBP didn’t hold him back as he K’d 10 batters while taking part in only the 3rd sub-two hour perfect game that would’ve been shown on TV.

Only 8,375 fans took in the game live in Arlington making Witt’s game the worst attended perfect game of the last 35+ years.

The Phillies’ Jim Bunning threw his perfect game against the New York Mets on June 21, 1964. The Mets were in their third year of existence, and finished with a 53-109 record in the midst of a seven year span of futility. One would expect Bunning’s perfecto to be much further down the list; after all, we’re talking about a Hall of Famer going against the worst team in the league. In fact, the Mets’ lineup doesn’t include a single star and doesn’t even have many “oh, I remember that guy” players. But there were actually a few surprises in the Mets’ lineup that bumps up Bunning’s ranking.

Leading the charge for the Mets was second baseman Ron Hunt, who would go on to start the All-Star Game later that season at Shea Stadium. Hunt, despite a complete lack of power, hit .303 and got on base at an impressive .357 clip, good enough for 32nd in the MLB. At this point, Hunt had not yet adopted his famous strategy of crowding the plate and getting hit by as many pitches as possible, which might have boosted his OBP even further (or sent him to the Disabled List!). In 1971, Hunt was hit by a pitch an astounding 50 times, a record that no other player has come within 15 of before or since.

The Mets also got an impressive season out of outfielder Joe Christopher, who slashed .300/.360/.466, an even better clip than Hunt. Christopher was a surprise for the Mets that season after being largely underwhelming in the first two years after he was selected in the expansion draft. 1964 was his only year with over 10 home runs and an average above .300. Before the Mets, he was part of other (near) perfect game history, making his debut in behind Harvey Haddix in his 12-inning near perfect game in 1959. He also came off the bench in three games in the 1960 World Series against the Yankees, securing himself a World Series ring.

Bunning’s perfect game came after a long hiatus (first in the regular season since 1922) and was surprisingly the first National League perfect game thrown in the modern era. There is not much else especially unique or distinct about Bunning’s achievement; he was a great pitcher throwing to a not so great team. But the odds of such an accomplishment are still astronomically low and Bunning’s work that day needs to be appreciated.

The 2nd perfect game in Phillies’ history was thrown by Phils legend and hall of famer Roy Halladay. Doc threw the perfect game in Florida at Sun Life ballpark making it the 6th ever perfect game thrown on the road, only 7 of the 21 perfect games to date have been thrown away from the pitcher’s home park.

The Phillies Marlins matchup in early 2010 featured two Aces of the NL East at the time, Roy and everyone’s favorite forgotten major leaguer, Josh Johnson, who at the time was coming off of a 2009 all star campaign in which he posted a 15-5 record. Fans in attendance may have been hoping for a pitcher’s duel and they got just that.

Wilson Valdez scored an unearned run for the Phils in the top half of the 3rd off of a line drive hit by Chase Utley that was mis-played in center field by Cameron Maybin. It ended up being the only run scored in the game. The Phillies did have 7 hits in the game, 4 of which came from the 7 and 8 spots in the order (Jason Castro and Carlos Ruiz), they just couldn’t string them together to score many runs. Luckily the run they did score was more than enough for Doc to work with that day.

Now 9 spots into our perfect game rankings we are starting to find lineups that should have been tougher for pitchers to work their way through. The Marlins went 80-82 in 2010 but batters 2-6 in the Marlins order were all quite formidable, headlined by Hanley Ramirez, a very tough out at the time. 2010 was basically the end of Hanley’s prime as one of the best shortstops in the league, his OBP was .378 in 2010 and he had a wRC+ of 127 which he has only bested two other times in his career since. The likes of Jorge Cantu, Dan Uggla, and Cody Ross were also in the lineup, Ross was the only batter in the top 6 who Roy did not strikeout during his perfecto. It was quite a decent lineup with few no names, the pitching performances here on out will have required quite a bit more skill.

With a POBP of .269 at the time, Halladay ranks 6th best among pitchers having thrown a perfect game. Even though the lineup was tougher than those we have seen so far Halladay’s ability to keep runners off base at the time was some of the best of anyone to throw a perfect game. Halladay also may have been one of the best in recent MLB history at staying sharp through the entirety of 9 innings. Roy led all of baseball in complete games for 5 years straight from 2007-2011. His endurance and relentless nature kept him at the top of the game for many years, he had an extra gear that when kicked in not many others could match. He is one of only 6 players with both a perfect game and no-hitter to their credit, the only pitcher with both a perfect game and postseason no-hitter.

The San Francisco Giants’ Matt Cain twirled the second of three perfect games in the 2012 MLB season in a weekday contest versus the Houston Astros on June 13, 2012. Cain’s perfect game is regarded as one of the most dominant in history, and is tied with Sandy Koufax’s 1965 perfecto for most strikeouts in a perfect game, with 14. The Astros were in the midst of a horrible season, with a 26-36 record in mid-June They would eventually finish 55-107, the second worst record of any team to fall victim to a perfect game. But if the lineup was so bad, why isn’t this game further down the list?

The Astros, though they were a bad team, had some big names still at the beginning of their career. Guys like Jose Altuve, J.D. Martinez, and Jed Lowrie, who have been big time contributors at various points through their career. Other quality contributors, like first baseman Carlos Lee (who did not play in the perfect game), third baseman Chris Johnson, and pitchers J.A. Happ and Wandy Rodriguez, were dumped for prospects at the July trading deadline. Put simply, this Astros team was not quite as bad as the record indicates.

The Astros major issues were in the outfield and behind the plate. As great as J.D. Martinez is today, he was nothing special in 2012, when his OPS was below .700 (the past few years, it has hovered around 1.000). The rest of the outfield was made up of Jordan Schafer and Brian Bogusevic, two light hitting role players who combined for a career bWAR below zero. Catcher Chris Snyder was equally bad, and pitcher J.A. Happ contributed a season OBP of .171. Happ was pulled for a pinch hitter after only one at bat; if he stayed in the game long enough for another at bat, Cain’s accomplishment would have been slightly more likely.

Cain himself was in the midst of an elite season, going 16-5 and twirling a 2.79 ERA on the way to his third and final All-Star appearance and first World Series ring. The Bradley-Terry model weighs his low (.271) POBP alongside the Astros’ relatively low team OBP, shifting the likelihood upward.

Sunday, May 17th, 1998 held the 2nd perfect game in Yankee history. In a year that David Wells led all the majors in win percentage, posting a 18-4 record, he was no stranger to 9 innings of work. He threw 5 shutouts in ‘98 which was the most of any pitcher in the major leagues that year.

Wells was pitching very well coming into the game against the Twins and came up against a relatively average lineup that featured a 41-year-old Paul Molitor batting 3rd. Only one player in the Twins lineup that day would go on to post an OPS+ of over 100 that year, outfielder Matt Lawton. Lawton may have been seeing the baseball best that day against Wells at Yankee Stadium, as he stung a pair of fly balls and was one of only two Twins not to post a strikeout.

There was no dangerous on-base threat in the Minnesota 9 that day other than Lawton but it was an American league lineup that featured more quality than we’ve seen in the back end of most of the lineups so far.

Wells ran through a lineup that we would expect to see perfection against only 7 times in 100,000 tries, according to the Bradley-Terry model which is no small feat. Wells struck out 11 batters which left 10 flyouts and six groundouts to total the 27 outs while facing the minimum.

Maybe most impressively, Wells has been famously noted to have thrown his perfect game while hungover after a long night out in the Big Apple until somewhere around 5:30am. He rallied and toed the rubber at 1:30pm that afternoon; the rest is truly baseball history.