The negotiations between MLB team owners and the MLBPA have ramped up in recent days, with both sides starting to exchange proposals for bringing professional baseball back in the midst of the COVID-19 pandemic. Regardless of how the economics and COVID testing protocols shake out in those agreements, everyone knows that the 2020 MLB season will be unlike any other not just in recent memory, but in all of baseball history. Fan-less stadiums seem to be a forgone conclusion. Same with the universal DH and an expanded playoffs. Changes to the league’s schedule and structure have had a few more sticking points, with many different proposals still on the table.

One of the first ideas was playing baseball only at spring training sites in Arizona or Florida. This idea was shut down relatively quickly as many logistical issues engulfed the plan and players are not particularly keen on leaving their families for months on end.

Momentum is gathering for teams to play games in their home ballparks, but with unprecedented divisional alignments to cut down on travel distance. An MLB proposal in late April would restructure the league into three 10-team divisions, essentially just combining divisions in the opposite leagues with one another (the only swap would be Pittsburgh and Atlanta). Teams would only play within their division. How much, if at all, does this restructuring help cut down the travel distance compared to using the traditional five 6-team division format?

Most of the East division is in the northeast, but needs to make the long trips to Florida to play the Rays and Marlins. The Central is fairly compact outside of the trip to Atlanta. The West, though, needs to deal with multiple long trips into relative no man’s land: Seattle, Colorado, and the two Texas teams are quite a ways away from the five California teams plus Arizona. All told, each team would travel around 10,500 miles from their home ballpark during the course of a 108 game season.

What if major league baseball wanted to keep their current division alignment? To reach the same number of games, each team could play the four teams in their division in nine 3-game series. The analysis from above is repeated in the tables below.

MLB’s 3 x 10 alignment saves about 500 miles per team compared to the standard 6 x 5 alignment over the course of a proposed 108 game season.

One option that I have explored to try to keep the normal 6 divisions of 5 teams is to significantly decrease travel within divisions by realigning NL and AL teams to divisions that strictly reflect their region of the nation and Canada.

I have settled on the following solution to minimize travel and keep the 5-team division structure that is important to the game. The realignment would allow for some semblance of normalcy in the 2020 season and help to reduce the spread of the COVID-19 virus.

If the focus is to cut down on travel time while maintaining the current MLB structure, nearly 100,000 miles of one-way travel could be saved when compared to the three division proposal. It is very clear that the travel burden would not be particularly spread evenly among every team; the South and the “Northwest” divisions would travel 3-4 times as much as the next lowest division but lots of potentially unnecessary travel would be saved. To increase schedule variety in this structure, limited inter-division play based on closest neighboring division teams, as in the 3 x 10 structure, could be implemented.

To find the mileages in the analysis, I used the latitude and longitude coordinates for each ballpark and found the straight-line distances between each of the major league ballparks. There were originally 870 team to team mileages calculated, all 29 opponents for each of the 30 teams.

Next, I found every division combination (30 choose 5) and broke each of those down into their 10 possible division matchups (5 choose 2) and merged each matchup with its corresponding mileage difference. I added each of the 10 mileages generated to create an intra-division one-way mileage sum and used that value to determine what division formats would be optimal from a purely distance perspective.

The optimized 6 x 5 solution was determined by looking at a K-means generated cluster plot and the clusters determined by K-means along with the location of the latitude, longitude coordinates to determine which teams would make the most sense to be grouped together. K-means determines the number of k clusters but does not create clusters of equal size. I used the plot below, along with the division combination mileage dataset, to perform some trial and error and logically work through what division combinations would make the most sense with minimal distance being the only requirement. 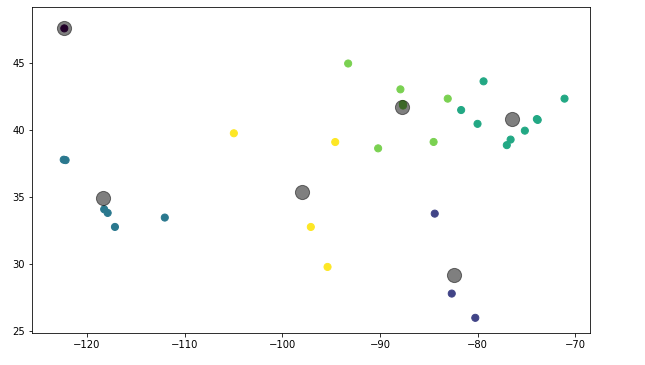 Brute forcing through all 140,000 division configurations to find the optimal league setup was not a computationally viable option. The number of possible division configuration can be significantly reduced by pairing teams together that should almost certainly be in the optimized solution, combinations like NYY-NYM, LAD-LAA, OAK-SFG, and CHC-CHW.

While adding these restrictions helps with the math, I did discover at least one seemingly obvious combination that was better when the teams were separated. The optimal 6 division approach that I determined does not include the 5-team combination that would require the least amount of mileage: WSN-BAL-PHI-NYY-NYM, which would only require 1214.1 miles total for each team to play each other one time. This setup, though, left BOS on an island. Eventually, I found that splitting up BAL and WSN optimized the travel distance.

The BAL-WSN split was definitely the toughest dispute when it came to determining where two teams should be grouped. Creating the South division was straight forward since there is a clear five team group in the South-Southeast portion of the US: Tampa Bay, Miami, Atlanta, Texas, and Houston.

The Midwest division came fairly easily as well since there is a clear triangle of teams surrounding the Chicago area: Chicago Cubs, Chicago White Sox, St. Louis, Milwaukee, and Cincinnati.

Next came the decision of how to determine what combination of 5 teams would make up the West division and what to do about the Mariners, the most isolated team in MLB. The closest team to the Mariners is the Giants, a 680-mile difference between the two cities. This is the largest discrepancy between a team that is considered closest to another team. The second furthest such scenario is the difference between Colorado and their closest opponent, Kansas City, which is a 555-mile difference.

Keeping this in mind, I began approaching the west by considering the five teams that are closest in proximity: OAK-SFG-LAA-LAD-SDP. I found no way to reduce the intra-division mileage of 2,558 miles of travel in this group by including what would be the closest outsider in the Arizona Diamondbacks. Having San Francisco and Oakland as an outlier pair relative to the center of the six teams k-means clustered in the southwest United States means that they carry much more weight in the division setup. When considering that including Arizona could create an optimal 4-team division over either of the Bay area teams with the LA center group, how is Arizona left out? Since we are dealing with 5-team divisions, they have to be on the outside looking in as there is no reason to split up the Bay Area teams and no other logical group of three teams to include with them.

Determining how the West division played out left us with 5 teams: Seattle, Arizona, Colorado, Minnesota, and Kansas City. Even though 9,605 miles is by far the largest travel burden of any division, a division with Seattle will always require the most travel. The optimal 5-team division for the Mariners would include SEA-SFG-OAK-LAD-LAA, which would create a division that would require 4,760 miles of travel. That would leave SDP-ARI-COL-KCR-MIN as the leftover 5-team division and an 8,569-mile travel requirement. This creates a smaller maximum division mileage that also does not include Seattle but also adds a little over 1,000 miles to the larger picture.

Due to the COVID-19 pandemic the season will almost certainly be shortened in some way. There is no doubt that this new division setup will save a large amount of travel and reduce the spread of the virus much more effectively than we would see in the normal 5 team division setup and possibly the newly proposed 10 team division alignment.

I also explored the possibility of keeping the AL and NL teams together in the 6 division setup but the only way that I found to optimize the current AL/NL division travel landscape would be to swap the Pirates from the NL Central to NL East and have the Braves take their place in the NL Central which would save about 300 miles each time division opponents played each other. The AL divisions are already optimized for distance proximity.