In each of the past 3 years as preseason expectations are being measured, the NL East has been touted as one of the most stacked divisions in baseball, if not the most stacked.

As we approached the 2021 season it was the prospects of what the Mets pitching staff could be, not to mention a batting lineup that was finally ready to break through. The Braves returning with an electric young lineup, led by arguably the best player in the league, Ronald Acuna Jr. The Nationals, a year removed from a world series title, still having more than enough to contend, led by Juan Soto. The Marlins boast one of the most underrated pitching staffs in the league along with an improved young team behind them. Then there are the Phillies, Bryce Harper, Aaron Nola, J.T. Realmuto returns, and the team is urgent to break the second longest postseason drought in baseball.

Well as we sit in September, with a few weeks left in the regular season, the NL east is in the running for the worst division in baseball. The AL Central may have something to say about that but as we approach the postseason the Braves, without Ronald Acuna Jr. and Mike Soroka, feel like the division’s team with the best chance to compete in the playoffs. A far cry from the high expectations set in spring training.

I want to take a look at the hitting approaches that have defined each team in the NL East, what the best batters have done correctly, and where the underperformers have gone wrong. 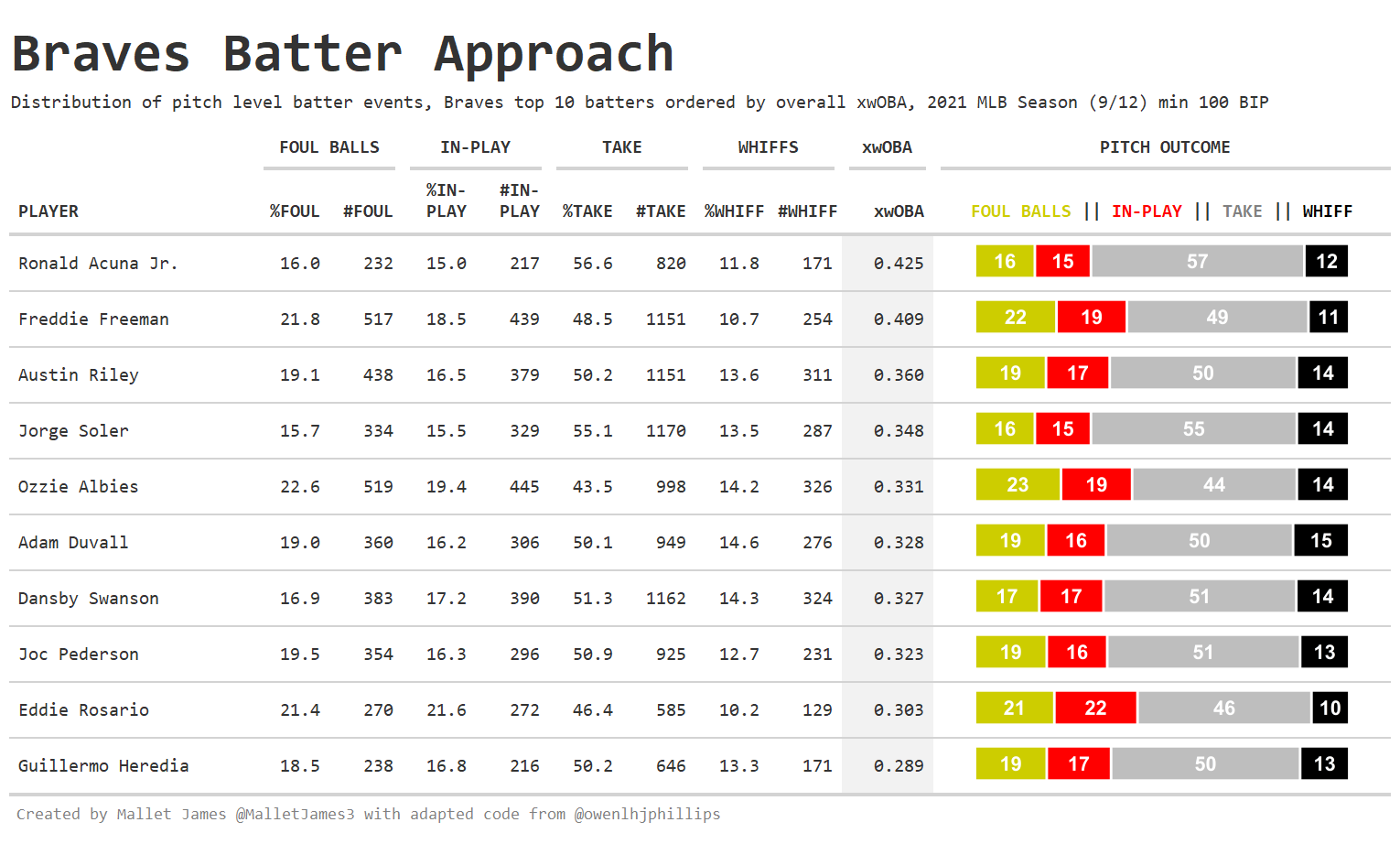 -Ozzie Albies and Freddie Freeman are number 2 and 3 repectively in total foul balls on the season, only Bo Bichette has more foul balls with 570 total, Eddie Rosario has a very similar approach profile to Albies and Freeman but has been much less effective in fewer plate appearances.

-Ronald Acuna Jr. has unfortunately been injured since July 10th but had one of the most productive seasons going out of any MLB batter at the plate, his selective eye paired with a 99th percentile barrel rate lends to a lethal combination at the plate and a well balanced approach profile.

-Adam Duvall leads the Braves in Whiff% on all pitches at 15% which is really quite reasonable considering he also leads the Braves and all of the NL in RBIs with 99… I call myself a baseball fan and he might’ve been my 99th guess at NL RBI leader, a very underrated and consistent bat. 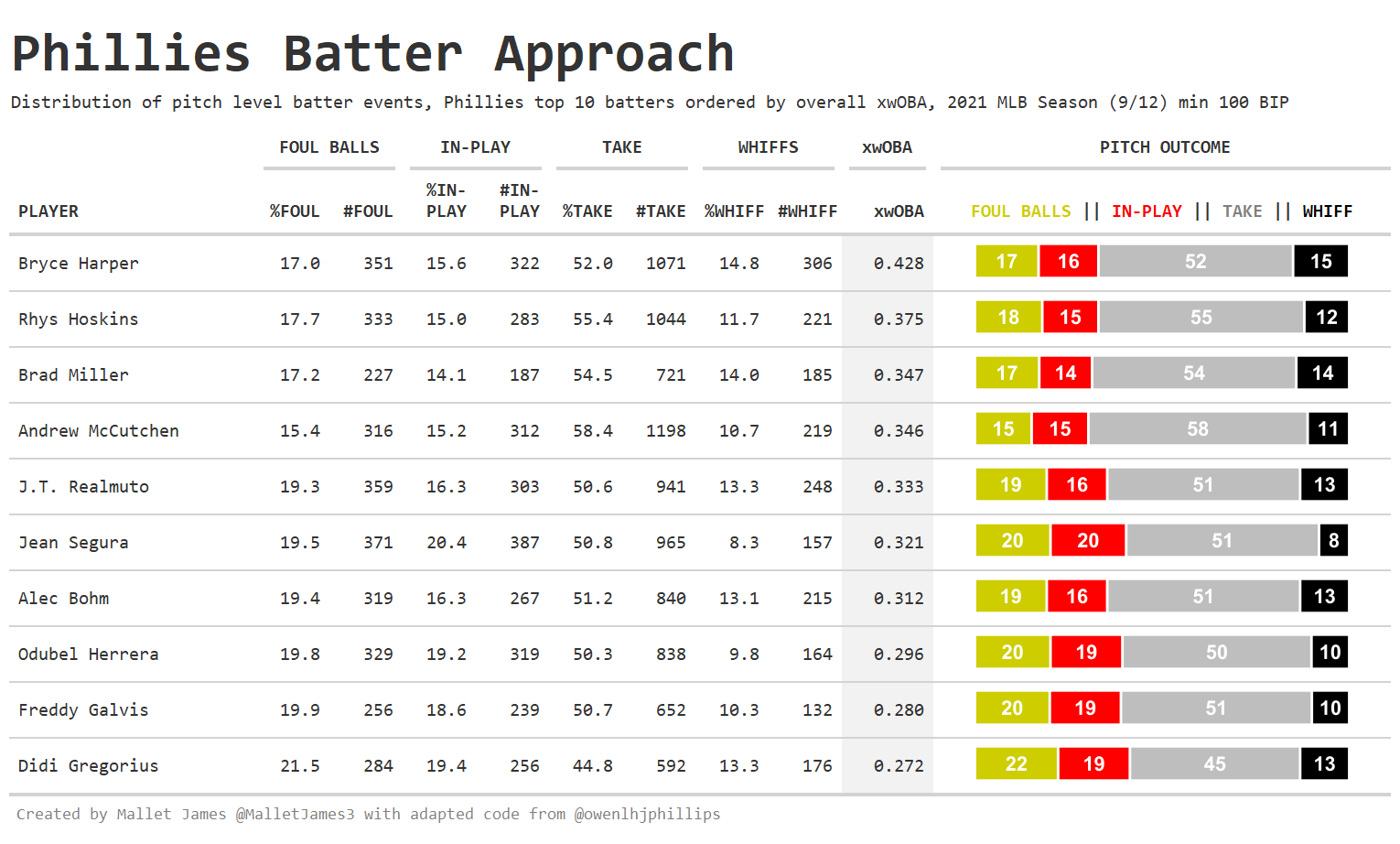 -Bryce Harper leads the league in xwOBA (Top 3 in xwOBA are all NL East players), he has kept pace with his 17.3 Barrel% from last season, posting a 17.1% Barrel percentage this year which is up over two points from his previous full-season high of 14.8% in 2019.

-Jean Segura does not swing and miss often, only 8% of all pitches he’s seen this season have ended in a swing and miss, since 2015 he has been one of the most consistent batters in the league posting an xBA between .260 and .270 almost every year along with an xSLG between .390 and .400, this year he sits at .264 xBA and .392 xSLG with a few weeks left. He is behind only Bryce Harper and J.T. Realmuto this year in WAR on the Phils at 2.6.

-Didi Gregorius has really struggled this year, he ranks in the bottom 10% of the league in all key Statcast hitting metrics and his Whiff% ranks in at the highest of his career, for a soft contact hitter he is swinging and missing far too much. His -12 run value on four-Seam fastballs is almost dead last in the MLB with only the likes of Michael A. Taylor and Harrison Bader doing less damage on the heater. 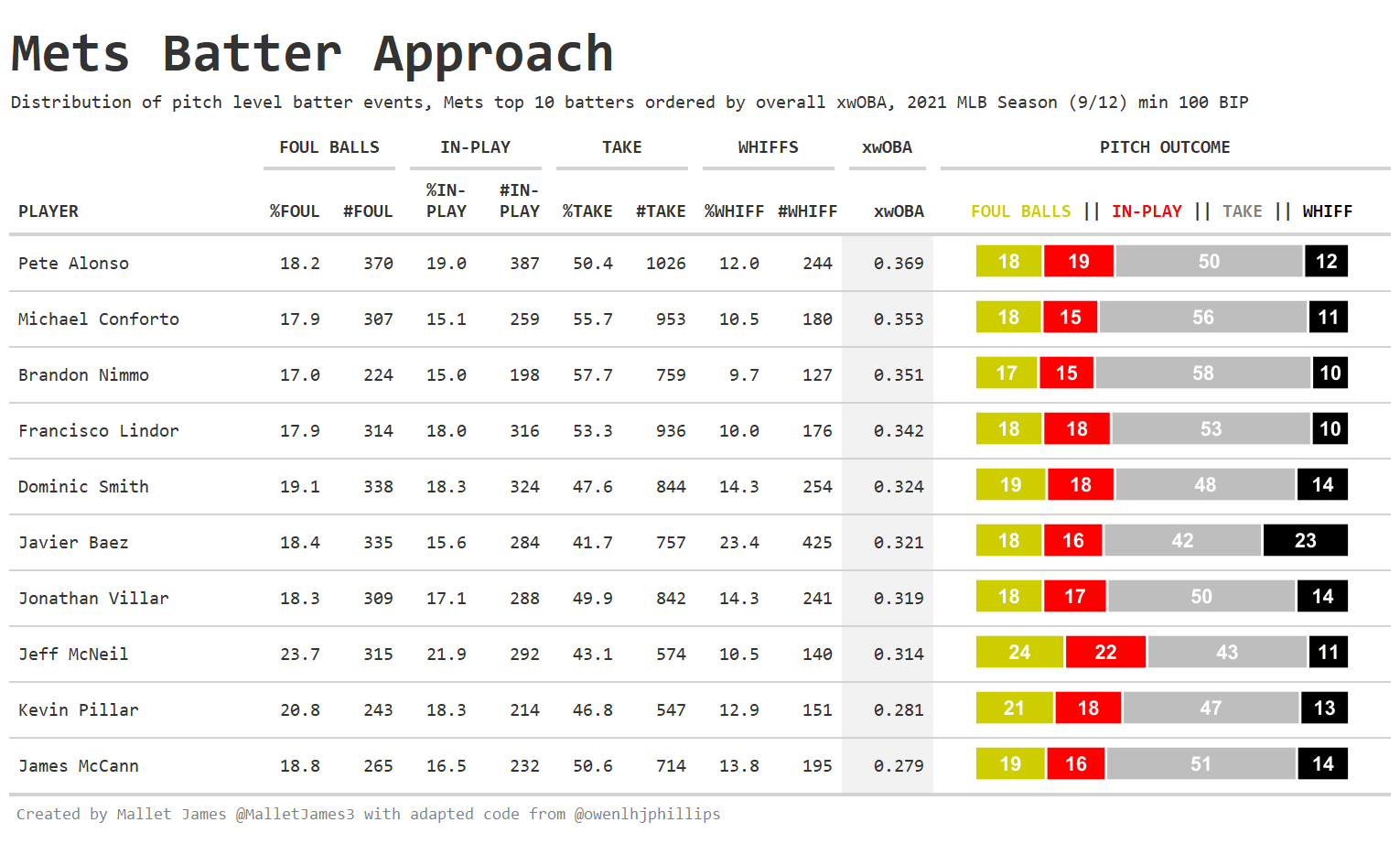 -One of the main reasons I was interested in doing this analysis was to see what Javi Baez’s approach distribution looks like and it does not disappoint. Javi Baez has been much better as of late, he’s actually on fire with a 1.153 OPS over the last month but one thing is certain, he does not take the batter’s box looking to leave the bat on his shoulder. Nearly 1/4 of all pitches that are thrown to Baez will result in a swing and miss which is astronomical, he’s swung and missed 425 times this year! The only batter that comes close given a similar number of pitches seen this year is his former teammate Patrick Wisdom who swings and misses at 1/5 of the pitches he sees. Javi is one of the most exciting players in baseball, that cannot be disputed, even when swinging and missing.

-Brandon Nimmo ties Andrew McCutchen in highest percentage (58%) of pitches taken out of the batters we’ve seen so far, the antithesis of Javi Baez. Where Nimmo has McCutchen beat by a wide margin is On-Base Percentage, Nimmo currently ranks 3rd in the league in OBP (.419) behind Bryce Harper and a player we’ll see soon, Juan Soto. In Nimmo and Jonathan Villar lately the Mets have had some very solid tablesetters batting leadoff this season.

-In the first year as the number 1 catcher on his own team James McCann has disappointed for the Mets, his xBA, xSLG, and xwOBA this season are all the worst marks of his career. He’s had many less at-bats in 2021 than he did even in 2019 but hitting only 10 homers this year and a .236/.301/.361 BA/OBP/SLG line is certainly less than what Mets brass had in mind for his 2021 campaign. 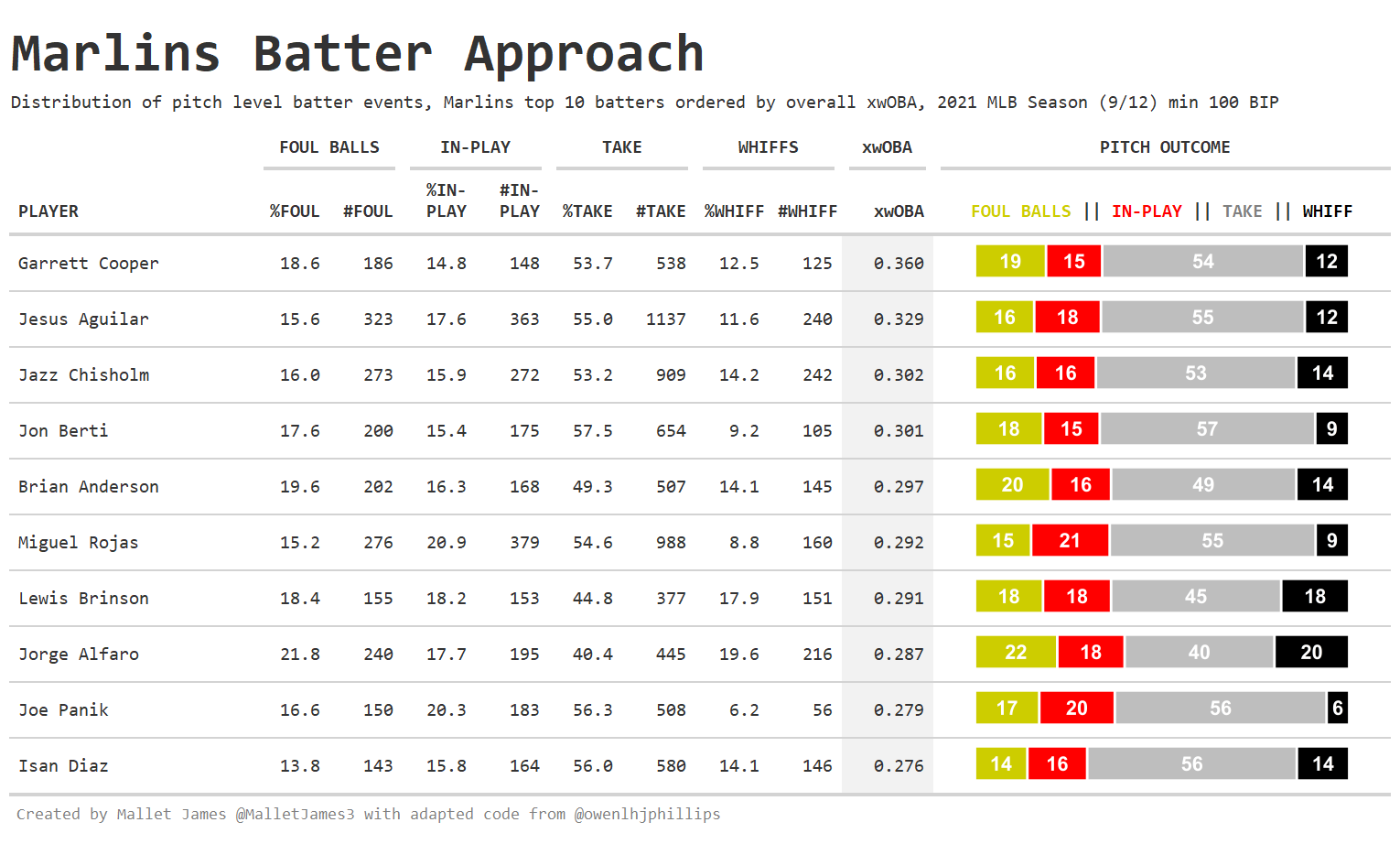 -Garrett Cooper is not a household name by any means, actually none of the Marlins batters are! With only 4 of their top 10 batters (BIP) posting xwOBA of over .300 it wouldn’t seem like much of a feat to lead the Marlins in xwOBA for the year. It really hasn’t required anything extraordinary for Garrett Cooper to lay claim to that title but he was having a much better season than you would think before season ending elbow surgery in July. The names around Garrett Cooper on the xwOBA leaderboard include Austin Riley, Buster Posey, Salvador Perez all guys that have been recognized for having strong seasons at the plate and deservedly so. Cooper had a .303 xBA in the shortened season last year which was top 4% in the league. He has only played more than 100 games in a season once in his short MLB career as injuries have halted much of his Major League progress but he has shown that he belongs at the highest level.

-Jazz Chisholm has been just okay in his first full major league season. He’s only 23 so there’s no need to worry yet, the potential is certainly there but he does have a near 30 K% which is bottom 10th percentile in the league, along with a few other key metrics that are near bottom 20th percntile (xBA, xwOBA) in the league. His above average hard hit rate shows signs of life and his sprint speed is elite. As the Marlins continue to rebuild he may be the main piece of the batting order to keep an eye on.

-We did find someone in the NL East who has been less likely to take a pitch than Javi Baez, Jorge Alfaro has only looked at 40% of the pitches he’s been thrown this season. Out of batters who have seen at least 1000 pitches this year he has taken the least amount of pitches, only 445 to be exact. 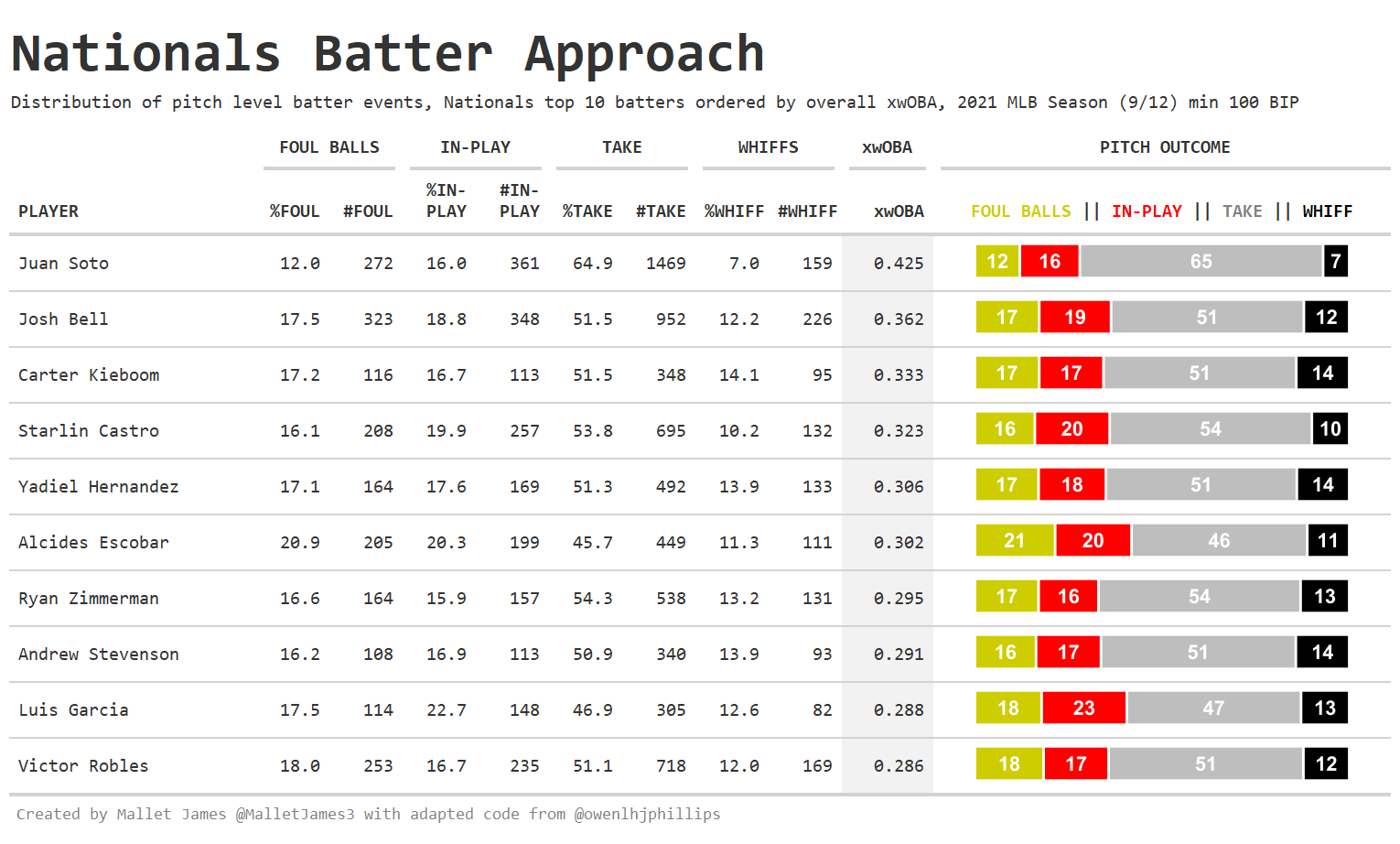 -There may not be a more beautiful approach distribution chart in the league than what we see here from Juan Soto. The 22 year-old has a Statcast hitter profile that is just about as red as any that you’ll see (Top 5 Percentile in many key Statcast Metrics) paired with one of the best eyes in the league. Soto takes 65% of the pitches that are thrown to him, the only batters that take more are Daniel Vogelbach and of course Yasmani Grandal. With a Hard Hit% of 53% he is squaring the ball up at an absurd rate when he does decide to swing. He swings and misses with the likes of Nicky Lopez and Ronald Torreyes while hitting the ball as hard as Tyler O’Neill or Nelson Cruz when he does make contact. In a time of truly great young MLB stars Juan Soto is one of the best.

-The sad thing about the now in full rebuild nationals, is that there is not a whole lot else going on in addition to Juan Soto on offense. Alcides Escobar is back in the MLB for the first time since 2018 and is having the best hitting season of his career by xBA (.262) since Statcast started in 2015. This is a post about hitting approach but after having a 96th percentile Outs Above Average (OAA) in 2017 Escobar followed that up with a 3rd Percentile OAA in 2018 and has a 10th percentile OAA this year, what happened to his defense?

-Victor Robles is now in AAA and has had one of the worst hitting seasons in the league this year, batting .203 with an average exit velocity of 84.1 MPH. Nothing wild jumps out in his approach distribution but the 17% of balls that he has put in play probably have looked a little different than say Austin Riley’s 17% of balls hit in play.

Explanation of Statcast metrics used in this post: https://www.mlb.com/glossary/statcast

Statistics and other metrics from Fangraphs, Baseball Savant, and Baseball Reference