Early on in June, MLB writer Mike Petriello (@mike_petriello) took note of the aggressive tendency of hitters swinging at the first pitch of an AB more than ever in this article.

Hitters are swinging at the first pitch more than ever for good reason, and it’s really twofold according to Petriello. With pitchers becoming more and more dominant the likelihood is higher that the best pitch you’ll see to hit in a AB is going to be the first one. Secondly, the mentality of teams to watch the first one to get the starter out of a game quicker just doesn’t exist anymore. If your name is not Adam Wainwright in 2021 you just don’t pitch deep into games, even if your stuff is that of an ace-level pitcher. Bullpen usage continues to grow and there are signs that show that attacking the first pitch in an AB can do a lot more damage in the long run than taking a look at it, risking an easy 0-1 start for the pitcher.

To revisit Petriello’s analysis and explore the idea a little further I took a look into the batters that have seen the most pitches in an AB on average along with the batters who have seen the least pitches in an AB on average. Has one group had more production than the other? What kind of batters do we see in each group? Yadier Molina is starting to attack the first pitch, Joey Votto is now taking a more aggressive approach, will Brett Gardner be next? 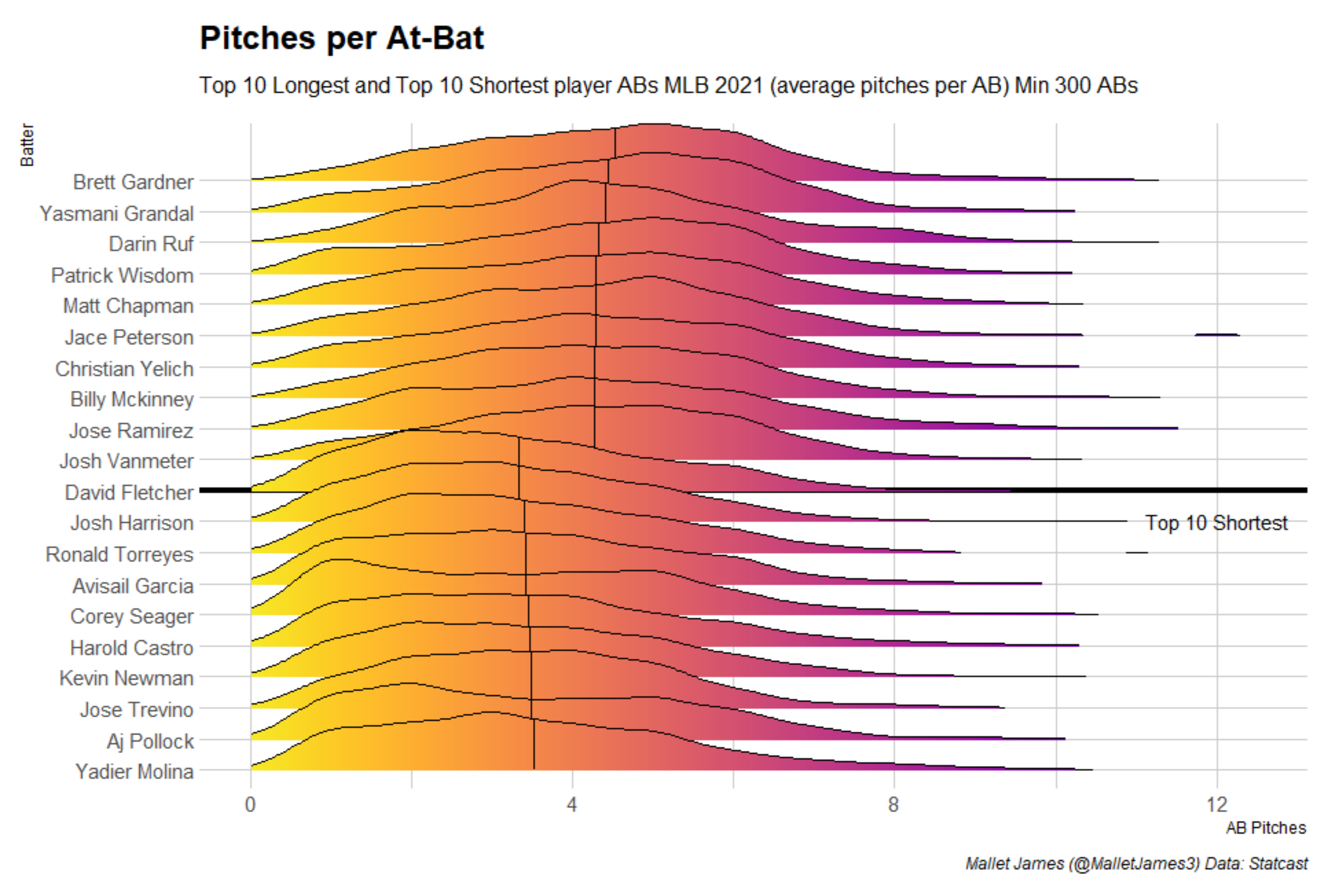 Gardner likely has no business being mentioned as a candidate for late career game improvement, especially with the likes of Votto and Molina. We do see above though, that Gardner leads the way for most pitches seen on average in an AB on the year with 4.54 pitches on average. David Fletcher is on the completely opposite end of the spectrum, leading the way in shortest ABs on average, he saw just 3.33 pitches per AB on average throughout the 2021 season.

Who would we rather have on our lineup card for a must win game this season, the batter with the longest ABs or batter with the shortest ABs in the league? If you asked me I think without much thought I would say the batter that makes the pitcher pitch the least, David Fletcher.

Fletcher’s put it in play, contact over everything else style is not flashy but it has allowed him to put himself on base quite often. When two of the best hitters in the game are in the lineup below you (plus Jared Walsh) this becomes quite valuable. What stands out for Fletcher though this year is a .262/.297/.324 BA/OBP/SLG line making for an OPS+ of 71. For a player like Fletcher whose job is to get on base by any means a .297 OBP just doesn’t cut it, it was the lowest of his career. His BB% which has always been low was also lowest of his career at 4.7%. As a grind it out leadoff batter, Fletcher and his team may have benefited from him seeing a few more pitches. I will delay my ruling from jumping on Fletcher as my pick for this year right away.

Neither batter at the extremes of the longest/shortest ABs continuum is one that I would want to put out there in a must win game. If I had to choose the 2021 version of Fletcher or Gardner for my lineup though I would probably choose Gardner as surprising as it sounds. Gardner’s xSLG was actually a few ticks lower than Fletcher’s in 2021 but Gardner’s patience at the plate is quite valuable in this case. Gardner had a 13% BB% in 2021, good for 92nd percentile in the league. Neither Fletcher nor Gardner can be expected to do much damage on their own so I trust Gardner’s ability to get on base with the walk boost over Fletcher’s ability to get on base likely via a softly hit single.

Though I might enjoy it, this exercise of having to choose between the top guys, Fletcher and Gardner, proves very little about guys who see a lot of pitches and guys who don’t see as many. A major league hitter may want to avoid being at the complete extreme of either based on the production of these guys but a sample size of 2 is not much to go on, each of them could well be outlier data points, etc.

The results are quite unsurprising and prove that the battle of Gardner vs. Fletcher is actually a microcosm of the bigger picture. The long AB group hits for a lesser average and higher SLG compared to the short AB group. The tradeoff between the two is almost exactly 30 points for each group (.234 v .264 AVG, .431 v .399 SLG).

If we had to choose the most productive group of 10 according to OPS+ it’s Gardner’s group of longer AB batters without question. They get on base more and SLG at a higher rate while working the pitcher - whatever that is worth these days - along with it.

Before taking a look at larger groups of batters that saw many pitches and few pitches versus league average, a few quick notes on the individuals we see in each group of 10 in the visual and tables above:

Turns out that when it comes to OPS it’s not that close, the average long AB batter does a lot more damage than the average short AB batter.

Some of the notables not in the top 10 from each group (rank pitches seen per AB in group):

Statistics and other metrics from Fangraphs, Baseball Savant, and Baseball Reference