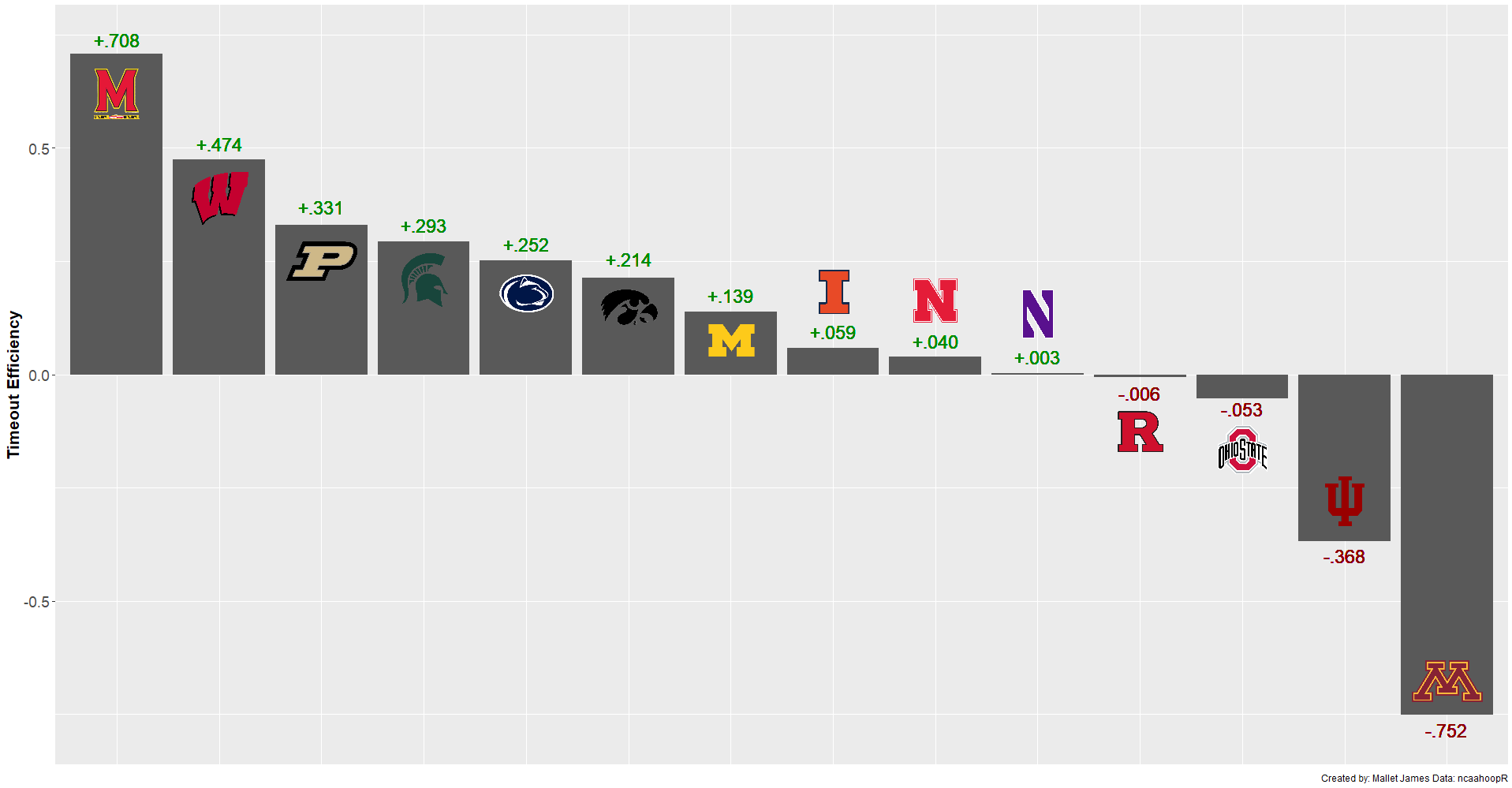 Big Ten basketball, in my mind, is the most fun and competitive basketball to watch in all of the college game. No matter if it is 1 versus 2 in the conference standings, 13 versus 14, or 1 versus 14 so many Big Ten conference games come down to the final possession and are close the whole way which makes every game a must watch for fans. Since the margin between teams is so small, finding advantages in the margins becomes crucial. Many times these often forgotten details are the deciding factor when it comes to deciding who wins or loses. With this in my mind, I set out to explore performance out of elected timeouts in the Big Ten conference, an aspect of Big Ten basketball that I think is very important when it comes to defining a successful team but one that is also too often overlooked.

Both Brian Mull and Andy Wittry at NCAA.com have discussed timeout efficiency, highlighting some standout performers on a national level. Other than the analysis conducted in these two articles I have not found a whole lot of coverage on performance out of timeouts concerning the Big Ten or really the broader D1 landscape as a whole. Given the competitiveness of the conference and its squadron of high profile coaches, I conducted a timeout efficiency analysis of Big Ten teams in the 2019-2020 regular season.

I started by diving into play by play data and took a look at how many points were scored by teams in the possession directly after an elected timeout was called and how many points were given up by that team in the possession directly after a timeout. I made these calculations based on the first shot attempt out of an elected timeout in order to determine the effect of solely what transpired in the timeout and the execution of either the offensive or defensive gameplan discussed. I calculated timeout efficiency using the formula below:

Clocking in with a +0.71, Mark Turgeon and the co-conference champion Terps almost lapped the field as a clear number 1 in timeout efficiency. Maryland was behind only Iowa for least timeouts called among Big Ten teams this season, but the Terps made the most out of their 60 called timeouts, while also defending against their opponent’s attempts to stop momentum.

The thing that really helped Turgeon in timeout situations was being able to generate offense from many different sources. Anthony Cowan led the Terps in scoring after timeouts called with 24 points, but Eric Ayala, Jalen Smith, Daryl Morsell, and Aaron Wiggins chipped in between 12 and 15 points. A truly balanced attack.

On the flip side, Minnesota was surprisingly poor in timeout efficiency, especially since they finished the year ranked 27 in Kenpom. Their -0.75 was just as bad as Maryland was good.

The Gophers particularly struggled from deep, hitting just 4 of 20 from three. Perhaps they were simply victims of small sample size, but it seems surprising that Richard Pitino would not lean more on second team All-Big Ten center Daniel Oturu.

Minnesota’s out-of-timeout defense, though, was the real head-scratcher. The Gophers held opponents to the fourth lowest true shooting percentage in the conference, while Oturu was also selected to the Big Ten’s All-Defensive team. In a conference were the smallest breaks could decide the outcome, perhaps Minnesota’s 15-16 overall record could be explained by a lack of preparedness or focus after stoppages in play.

For the rest of the league, the results were not nearly has black and white as they were for Maryland and Minnesota. Iowa, with Big Ten Player of the Year Luka Garza, sizzled on offense in all situations, setting the standard for overall offensive efficiency in the conference. Their defense, though, essentially gave back everything that they earned, especially in out-of-timeout situations, where their defensive efficiency was an appalling 1.20.

If Maryland was to Minnesota, then Penn State was to Iowa. The breakthrough 2019-2020 campaign for the Nittany Lions was largely due to its defense, allowing just 0.939 points out of their opponents elected timeouts, second best in the conference. Patrick Chambers-led teams have always been characterized by their success on the defensive end and it certainly showed out of the huddle. 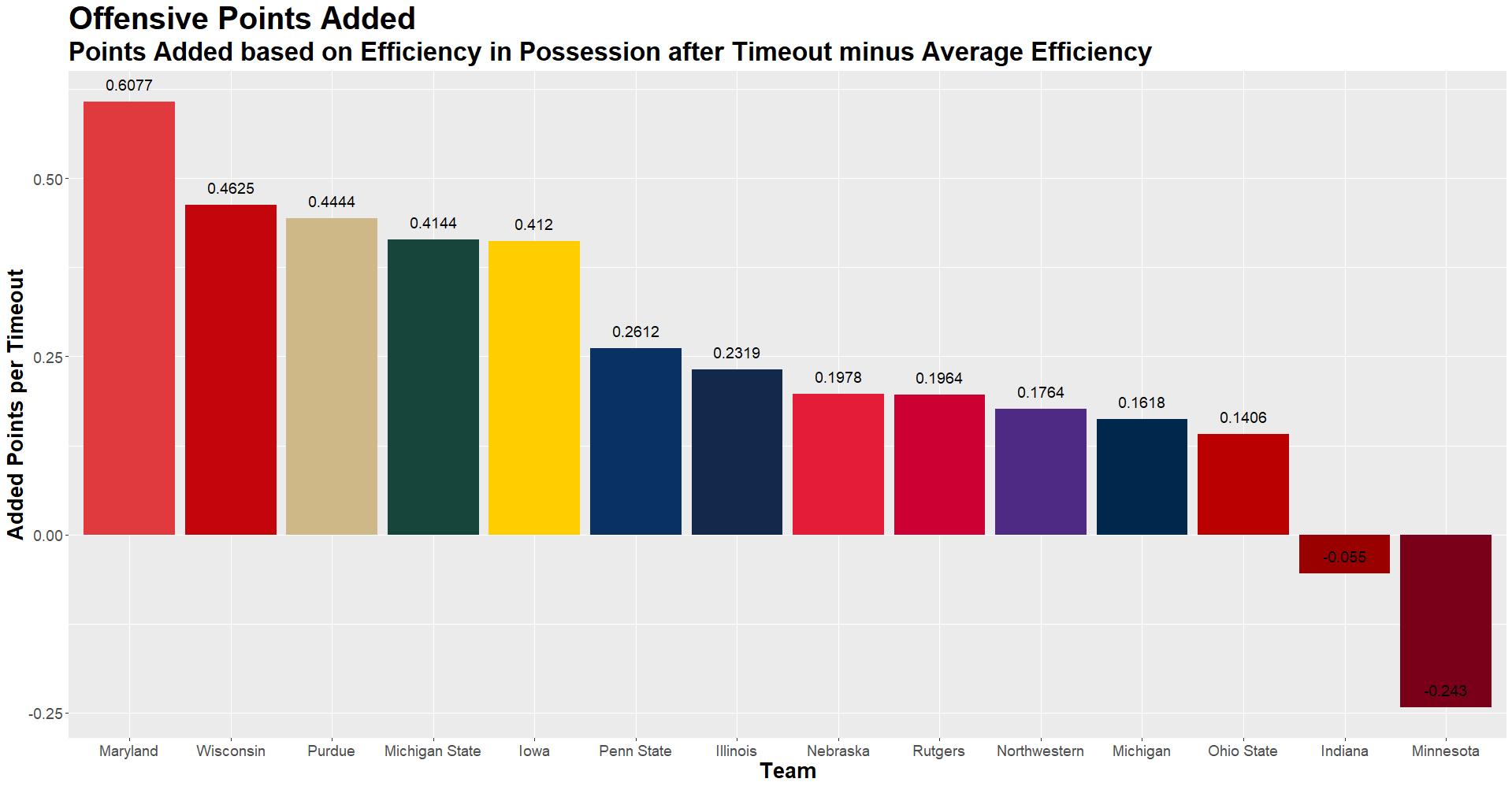 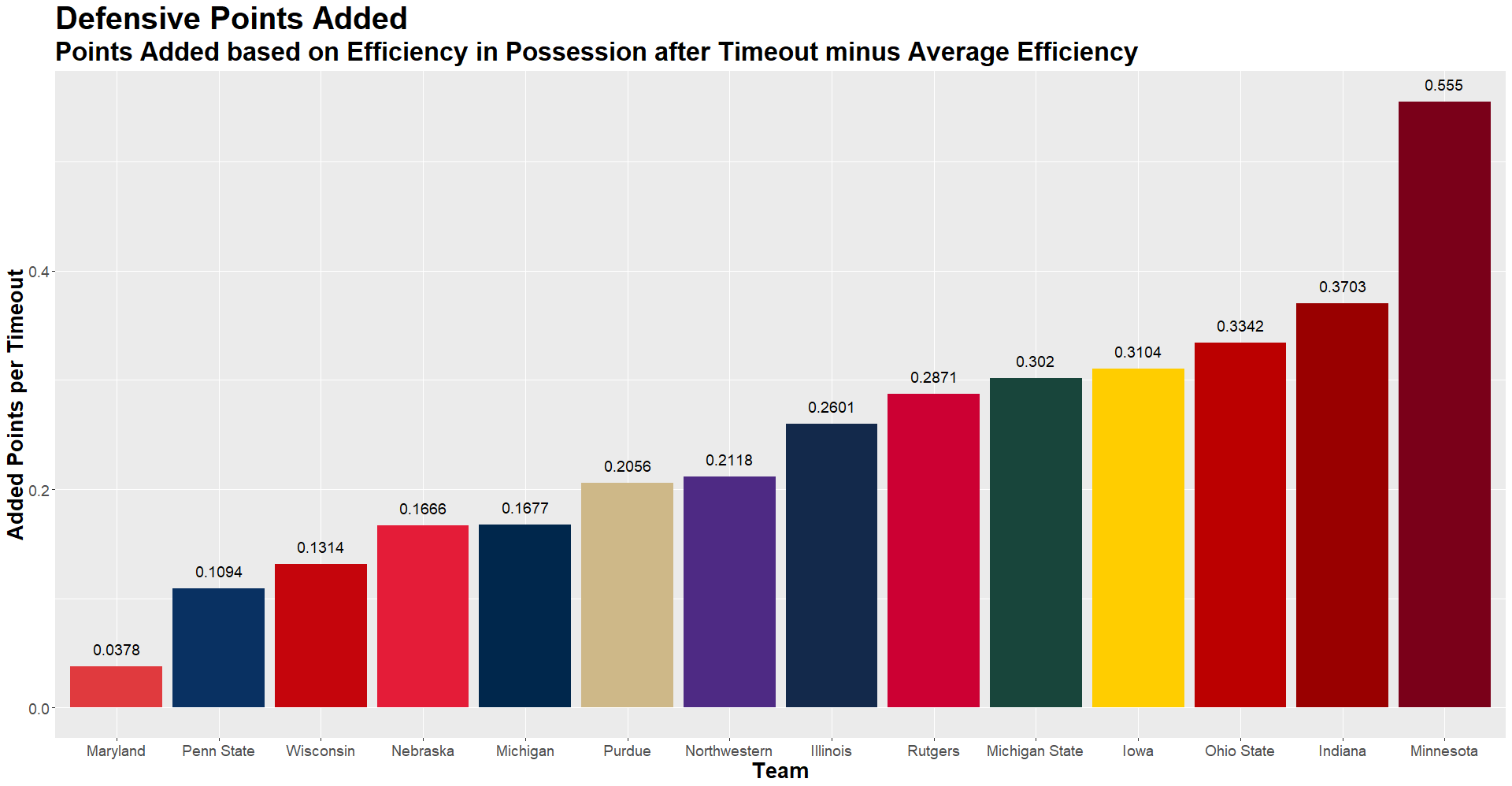 The bar plots above are another way to help visualize production added out of timeout, on the offensive end points added shows how much better a team performed out of elected timeouts compared to their normal offensive efficiency. Defensively, defensive points added show how much more a team gave up when their opponent called a timeout, ideally you would want this number to be as low as possible.

In Division I college basketball, coaches and teams sink or swim based on sound in-game management. When the competition ratchets up in arguably the best conference in the country, seemingly insignificant moments can be the difference between an NCAA tournament bid and wallowing in mediocrity. Executing out of a timeout is one aspect of the game where a coach’s in-game management skills are brought to the forefront. Mark Turgeon built Maryland into a Final Four caliber team, one that could seize momentum after stops in play, while Minnesota could have seen their season outlook completely change with more efficient execution in the same situations.

Keep pleading with your coach to call that timeout through your TV. Be aware, though, that what he is scribbling on that white board in the huddle could be making or breaking your team’s season.